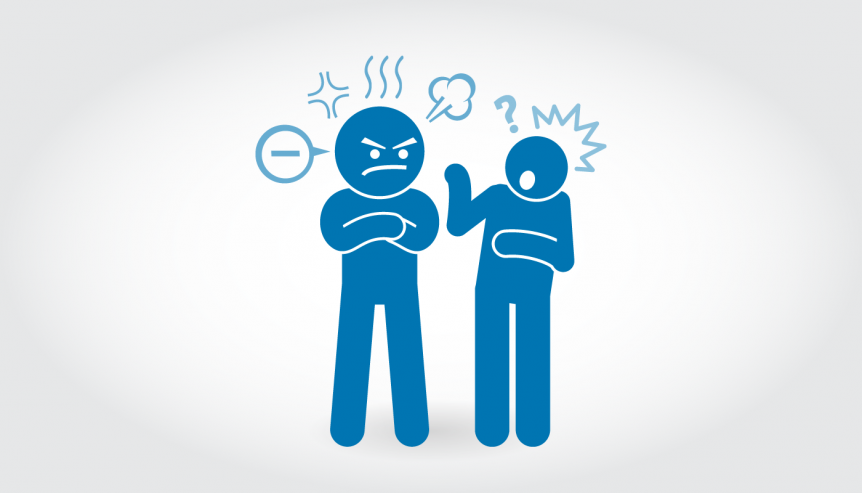 The teacher announced a spelling practice in class. She said each student had to come forward, say what his father did for a living, and spell his occupation.

Mary was first. She said, “My dad is a baker, b-a-k-e-r, and if he were here, he would give everyone a cookie.”

Then Sheila announced, “My dad is a banker, b-a-n-k-e-r, and if he were here, he’d give each of you a nickel.”

She turned to Herbie. He said, “My dad is a bookie, b-o-o-k-i-e, and if he were here, he’d give you 9 to 1 that Jimmy ain’t ever gonna spell electrician.”

For all the talk about empowerment, team building, and employee engagement, the data still says workers have a hard time getting through to their leaders. That’s rude.

And in study after study, employees report the rising tide of rudeness in the workplace.

What can you do about it? Because it’s too expensive to ignore.

Actually, you are not helpless when it comes to rudeness in the workplace. You can actually do some things to help turn your organization … or at least your little corner of the office … into a more positive place to work.

In fact, it’s how I start the second day of my Journey-to-the-Extraordinary program, coming to Chicago, IL on November 10-11, 2016.

For starters, try these tips.

1. Recognize the Extent of Rudeness.

In a survey by the research firm, Watson Wyatt Worldwide, they found that only 19% of managers say they consider employee input when making policy. That’s rude.

In another study by the same firm, some 4300 workers were surveyed. They found that only 33% of them said their companies listened to them or acted on their suggestions. That’s rude.

If the CEO spends a billion dollars of the company’s money and then gets a $50 million bonus, that’s rude.

If your boss says “I’ll get back to you” and never does, that’s rude.

If you ever give your customer a poor quality product or a poor level of service, that’s rude.

In other words, take a look. Notice the rudeness around you, because you’re never going to fix it or eliminate if you don’t even see it.

If you come across a rude boss or coworker, you can’t dismiss it by saying something like “That’s just the way he is,” or “It’s no big deal.”

Rudeness is wrong, unprofessional, and costly. And it cannot and should not be tolerated. Quit excusing it when you see it.

Dr. Karl Bruder, the chairman of the Speech Communication Department at Emporia State University, taught me that lesson early on. After going through a three-day interview with his entire staff, after teaching some sample classes to check out my effectiveness, Dr. Bruder pulled me aside and spoke words I’ll never forget.

He said, “Young man, you look real good. You seem to be an excellent teacher. But I want you to know one thing before I hire you. We’ve got a great team here. And no matter how good of a teacher you might be, if you do anything to mess up this team, you’re gone.”

In other words, I was going to be held accountable for the quality of my work AND my impact on the team atmosphere. There would be no room for rudeness, only kindness and professionalism.

I believe he was absolutely right. And I still advise my clients to hold their people accountable for the same two things … quality of work and impact on atmosphere.

3. Recognize the Cost of Rudeness.

If you’re still not convinced that you can let rudeness go unchecked at work (and even in your families), look at the data.

With a challenging economy and lots of tough competition, you can’t afford rudeness at work.

Now that you know all that, what can you do personally to counteract the rudeness?

Sometimes, what we consider rudeness is really quite appropriate in another culture.

For example, I was a bit shocked when I read a story in the Bangkok Post newspaper when I was speaking in Thailand. It talked about a nurse in Shanghai, China who was fined 50 Yuan ($6.00 USD) for failing to wear lipstick on the job.

As journalist Shen Yaohong wrote in his editorial, “When I was in the hospital a few weeks ago, some of the nurses looked dreadful…so a bit of makeup is good for a patient’s health.” And the hospital administrators imposed the rule after one patient complained that “Some of the nurses’ faces looked even worse than sick patients.”

In many cultures, such rules would be considered highly sexist and discriminatory. In their culture, however, the lack of make-up was considered rude.

So when you’re in another culture or working with a diverse group of people, follow the Biblical advice that says, “Be slow to judge and quick to understand.” Because sometimes rudeness is totally unintentional.

Ronald Reagan was guilty of such unintentional rudeness when he was governor of California. He was speaking in Mexico City and relayed this report: “After I had finished speaking, I sat down to rather unenthusiastic applause and I was a little embarrassed.”

Reagan continued: “The speaker who followed me spoke in Spanish–which I didn’t understand–and he was being applauded about every paragraph. To hide my embarrassment, I started clapping before everyone else and longer than anyone else until our ambassador leaned over and said, ‘I wouldn’t do that if I were you. He’s interpreting your speech’.”

Then, if you are around rude people, you can…

5. Repeat What Was Said.

If, on the other hand, the person knows he’s been rude, your repetition of his comment may stop him in the future. He realizes he can’t get away with it. He can’t slip in a subtle zinger once in a while and not be called on the carpet.

7. Steer the Discussion Toward Solutions.

In other words, rudeness tends to be personal and it tends to block productivity. So you could ignore the question of “who is doing what wrong” and focus on “how will we make things better.” The first approach, the “who” approach, produces defensiveness, while the “how” approach encourages teamwork.

8. Have a Positive Party Funded by Negative People.

Establish a new ruling in your department or family. Whenever you catch someone being rude, the offender has to put $1.00 in the kitty. When you’ve accumulated $25, you throw a pizza party for the team.

Final Thought: The way I see it, there are plenty of reasons and plenty of times that frustration, anger, and other negative emotions might be justified, but there is never a time that rude behavior is acceptable.

There’s ONLY One Place You Can Get It

If you think you can get the same kind of life-changing, success-building, career-enhancing material you get in my Journey-to-the-Extraordinary program somewhere else, you’re wrong.  You can only find it at the Journey program I’m bringing to Chicago, IL this November 10-11, 2016.

“Folks around here have been anxious to hear how your Journey went.  Some of my supervisors thought we might have about the same kind of program ‘in-house,’ and I have had to dash their imagination — tactfully of course.”

“It is essential … that no matter whom you are or where you work … that you get training from the ‘outside.’ It has a refreshing quality that is simply unbeatable — by itself.  Plus the content offered at your Journey experience is absolutely loaded with positive nuggets, concepts, stories, skills, and strategies that have changed my life and my work in wonderful ways.”

Art Corwin, the President of the Moretrench American Corporation, feels the same way.  Several years ago he attended my Journey program. And now he sends several of his employees and managers to almost every Journey I offer.

One such person was Todd Andrews. After returning from the Journey, Todd wrote to Art, the President, saying, “I want to thank you for sending me to Dr. Zimmerman’s Journey.  I was expecting it to be a good seminar — but it far exceeded my expectations.  The seminar was excellent.”

Even more revealing, Todd told his boss, “There were so many things I took from it that are helping me both professionally and personally. I learned a lot about myself, and I’m looking at things in a new light.  I hope you continue to send people in the future.  It’s definitely time and money well-spent.”

Click Here for a Complete Outline of my Journey Program.

To register now and save $600 on your tuition, click the button below: