The economy is great. Wages are up.  Unemployment is down.  And some statistics say this may be the healthiest economy we’ve seen in 49 years.

However, such an economy is not all peaches and cream because you may have a lot more stress and a lot less balance than you would like.

Work hours are increasing. According to Witt Associations, an executive search firm, the work week for managers has increased 10 to 15 hours a week in recent years.

And family time is decreasing. According to the Family Research Council, parents spend 40% less time with their children than they did 25 years ago.

To make matters worse, you can’t expect to get much sympathy for your lack of work-life balance.  As David Ogilvy wrote in Confessions of an Advertising Man, “If you stay home and tend to your gardens and children, I will love you more as a human being, but don’t expect to be the first person promoted in your group.”

That being the case, it should be fairly obvious that the only way you’re going to decrease your stress and increase your work-life balance is for YOU to do something.  To be precise, for YOU to implement at least one positive strategy in every one of the 8 dimensions of life. 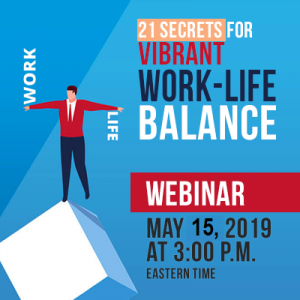 But let me give you a head start.  Here are two strategies you can use right now … strategies that will pay you huge work-life balance dividends almost immediately.

Of course, you may think you’ve got too much to do; that you couldn’t possibly stop and be quiet for a few minutes.

But you’ll pay a price if you don’t. Novelist Robert Louis Stevenson said, “Extreme busyness…is a symptom of deficient vitality.” Physicist Blaise Pascal said, “One of the ways in which man brings the most trouble upon himself is by his inability to be still.”

If you’re not doing this at present, I’d suggest you start with five or ten minutes a day. Find a private place and just sit there quietly. Don’t try to solve any of your problems. Don’t try to focus on anything. Just experience the calmness of silence and the quietness will work as a pressure releaser.

Make time for your most important relationships.

It’s taken me most of my life to learn this and still I make mistakes.  I spent too much of my life thinking that I would first get my work done and then I could focus on my family.  I thought once I was caught up, I could really listen to my wife and kids, or I could fully participate in some family outing.

The problem was, and the problem is, I will never be finished with my work.  I will never be caught up.  So I keep reminding myself to make time for my most important relationships – now. Maybe this story will remind you to do the same thing.

Thomas Carlyle, one of the world’s greatest writers, married his secretary, Jane Welsh, in 1826.  She was an intelligent, attractive and somewhat temperamental daughter of a well-to-do doctor.  They had their quarrels and misunderstandings, but they still loved each other dearly.  After their marriage, Jane continued to serve as his secretary.  Unfortunately, after many years of marriage, Jane became ill.

Being a hard worker, Carlyle became so absorbed in his writings that he let Jane continue working for several weeks after she became ill.  She had cancer, but it was one of those slow-growing kinds of cancer.  Finally, she became confined to her bed.

Although Carlyle loved her dearly, he seldom found time to stay with her.  After all, he was busy with his work. When Jane died, they carried her to the cemetery.  It was raining hard; the mud was deep, and the day was miserable.

Following the funeral, Carlyle went back to his home.  He was taking it hard.  He went up the stairs to Jane’s room and sat down in the chair next to her bed.  He sat there thinking about how little time he had spent with her and wishing so much he had a chance to do it differently.

Noticing her diary on a table beside the bed, he picked it up and began to read.  Suddenly he was shocked.  He saw it.  There, on one page, she had written a single line: “Yesterday he spent an hour with me and it was like heaven. I love him so.”

Something dawned on him that he had not noticed before. He had been too busy to notice that he meant so much to her.  He thought of all the times he had gone about his work without thinking about her and without noticing her.

Then Carlyle turned the page in the diary.  There he noticed some words that broke his heart.  “I have listened all day to hear his steps in the hall, but now it is late and I guess he won’t come today.”

Carlyle read a little more in the book.  Then he threw it down and ran out of the house.  Some of his friends found him at the grave, his face buried in the mud.  His eyes were red from weeping.  Tears continued to roll down his cheeks.  He kept repeating over and over again, “If I had only known, if I had only known.”

But it was too late for Carlyle.  She was dead.  After Jane’s death, Carlyle made little attempt to write again, living another 15 years as a “partial recluse.”

The lesson is clear.  Don’t wait until you’re finished with all your work before you focus on your relationships.  That will never give you the meaningful life you desire.

Put aside five minutes each day this week for nothing but quietness. Make it ten minutes each day next week. Then make it a habit. You’ll like the extra sense of peace, serenity, control and creativity that will come to you.