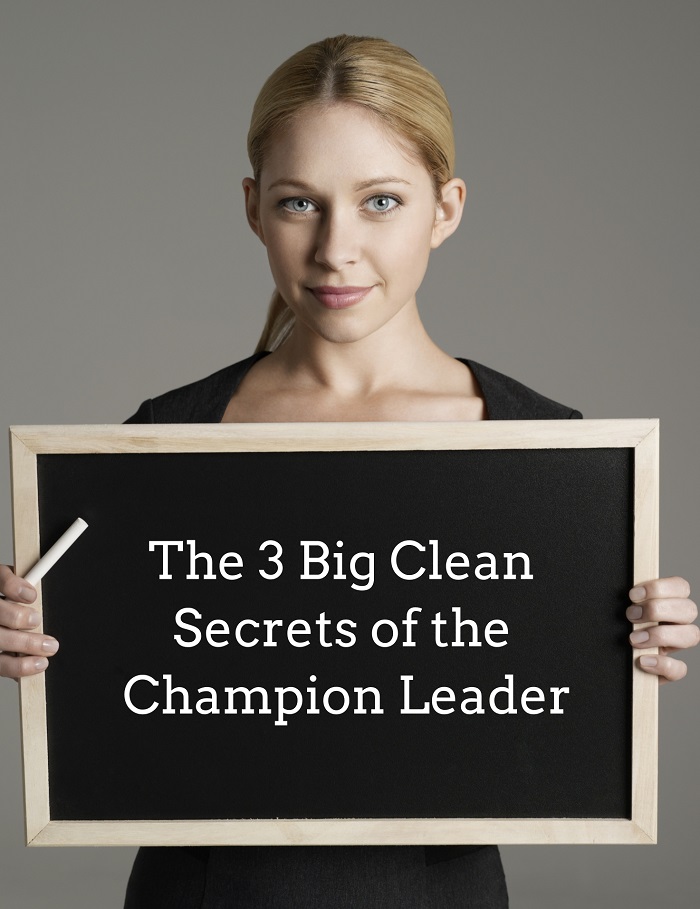 Every day I get dozens of commercial and political emails trying to sell me some product or some candidate. And often times they will use a Subject Line that suggests they are going to reveal some dirty little secrets about a competitor’s product or a different politician.

I have to admit that those emails are intriguing. After all, we’d all like to know a few more dirty little secrets because it jazzes up our conversation with others. It builds our egos, making it look like we’ve got access to inside information that others don’t.

Today, I’m bucking the trend in this Tuesday Tip. Instead of sharing some dirty little secrets about leadership, I want you to know about The 3 Big Clean Secrets of the Champion Leader. And to the extent you master and exhibit these 3 Big Clean Secrets, you’ll be more effective in getting others to excel, both personally and professionally.

Let me ask you, “How many great, really great teachers did you have in all your years of schooling?”

Most people tell me one, two, three, or four.

Then let me ask you, “How many teachers did you have over the years?”

Most people tell me “dozens.” Now that’s strange. It’s also sad. You had dozens of teachers, yet so few of them were really great.

When I probe a bit deeper, when I ask people what made those teachers great, I usually get the same answer. Can you guess? They usually say, “Those teachers cared.”

Barry Alvarez knows that as the legendary football coach at the University of Wisconsin. When he inherited a dispirited team, he knew he had to turn the players’ attitudes and actions around.

He started doing that the very first day the freshmen players came in. He gave them each a pencil and paper and told them to write their parents. They were to tell their parents they loved them.

Alvarez knew that if he could strengthen the emotional expression the players gave their parents, it would be easier for the players to say they cared about each other.

After the players were there a while, he would bring them together for some “team building.” He would ask each of them to talk about the teammate they most respected.

Often times, their choice would come as a surprise. One player, for example, picked out a kid who wasn’t even there on a scholarship. He said, “I respect him the most because he’s been here for years and busted his tail all this time and never complained.”

Could the same thing be said about you? That you care deeply about the other people in your life and in your work?

And do you care enough about yourself to invest in yourself? Champion Leaders like dental sales representative Megan Bentley do that also. She wrote:

Megan went on to say,

So the First Big Clean Secret is caring … caring deeply about others as well as yourself.

You see, when you tell the truth, you are telling the other person that you care about him or her. You are saying that people have a right to know what is happening, why it is happening, and what the next steps will be.

And truth-telling communicates respect. Champion Leaders know that silence, double talk, or delayed truth telling will create unnecessary anxiety in people, and they respect people too much to put them through that kind of stress.

President Dwight Eisenhower put it this way: “The supreme quality for a leader is unquestionable integrity. Without it, no real success is possible, no matter whether it is on a section gang, a football field, in an army, or in an office. If a man’s associates find him guilty of phoniness, if they find he lacks forthright integrity, he will fail.”

Champion Leaders have high expectations. They don’t let people get by with mediocrity.

Think about it. Think back to high school. Think about the teacher who let you goof off or slide by. You might have enjoyed the easy ride while you were getting it, but you also lost respect for yourself and that teacher. You simply cannot feel good about yourself when you do just enough to get by.

By contrast, think of the teacher who made you work, work, work. She kept saying “You can do it and you’re going to do it.” You may have disliked that teacher for a while, but that was the teacher you respected the most and that was the one who brought the best out of you.

In a similar sense, Champion Leaders expect a lot from people.

One of my CEO friends credits his success to his mother who practiced this Third Big Clean Secret of high expectations. As he puts it, he was the youngest of ten children and his father died when he was in the seventh grade. So his mother raised all the kids by herself. She worked as an assembly line worker and as a cleaning lady, but she had very high expectations for each of her children.

How about you? Do you expect the best from your coworkers? Even your family members? Or do you figure, “That’s just like him … just trying to slide by?” Your expectations always come through and they always affect the outcome you’re going to get.