Last Sunday was the grand finale of the most popular television series in all of PBS history … the last episode of Downton Abbey.  Millions of people tuned in to see how it would all turn out, and hundreds of millions of people have been watching the series during its five-year run.

When a TV show creates that kind of attention, I ask myself a question: “What can we learn from the series?”  Quite a bit, actually.

If you’re not familiar with the show, most of the action takes place in the early 1900’s in a magnificent mansion called Downton Abbey.  Most of the show’s characters are either members of one wealthy upper-class family or their servants.

One character I particularly liked is Mr. Carson, the head butler and the chief of staff in the show. I like Mr. Carson because he reminds me of one of my favorite bosses from the time I worked in a mini-Downton Abbey many years ago.  As a teenager, I lived in England and worked in an 18th century mansion named Underscar. I reported to Mrs. Jackson, who served in a role much like Mr. Carson.  She was in charge of the kitchen staff, the wait staff, the laundry workers, and the room attendants.  And like Mr. Carson, she was a zealot for standards and style.

Most importantly, her leadership taught me lessons that have continued to serve me throughout my life and my career.  I thought you might benefit from the lessons she taught, as well.

Mrs. Jackson was not an advocate of today’s belief that says, “Do your thing … Do whatever you like … Just do what comes naturally … or … It doesn’t matter what you believe as long as you’re sincere.”  No, there was a right way to do things, and a wrong way to do things. And Mrs. Jackson expected us to do things the right way.  She knew it didn’t work to have a hundred different definitions of “quality” being acted out by her staff.

For example, I served meals in the mansion’s exquisite dining room.  But growing up in a blue-collar, Midwestern home, I had no idea how to set out 12 pieces of flatware for each guest, let alone six different glasses and an assortment of plates.  Mrs. Jackson taught me how to do that.  And she expected me to adhere to those standards once she taught me how to do it.

According to Mrs. Jackson, there was a vast difference between “giving someone a dining experience” and people “going out to find something to eat.”  The first approach created a lasting and positive memory, while the second approach did nothing more than satisfy a biological need.  Obviously, at Underscar, the first approach was the right approach for our guests.

Are you teaching your people what they need to know?  And are you holding them accountable for doing things right?

2. As a leader, teach your people that customer service should be more of an experience than a transaction.

Underscar was set in a spectacular location, on the side of a mountain, looking down into a village and to the crystal-blue lake beyond.  The setting was so majestic that I could stand to take in the view and be transfixed for hours at a time.  But so could our guests.  Mrs. Jackson knew that.

So she made sure that we, the servants, did not do anything that would distract from the WOW experience the guests were having.  She taught us how to communicate with respect, no matter who the person or what the situation, using such phrases as:  “Sir … Madam … I’d be happy to … and … It would be my pleasure.”  She taught us how to make a bed with sheets so tight that they didn’t loosen and they didn’t wrinkle.  And she taught us how to select the correct flowers to place in each room and where to set the flowers for the guests’ maximum enjoyment.

Mrs. Jackson knew that our basic job description was to house and feed our guests.  But that job description was “transactional” in nature, and that wasn’t good enough.  We had go beyond merely just “doing” our jobs.  We had to create an emotional experience FOR our guests and build a quality relationship WITH our guests so they would continue to talk about us in the future.  She knew that was the kind of customer service that made for a successful enterprise.

For example, I’ll never forget the time the Lord and Lady of Underscar and their 40 guests all came down with the flu.  Mrs. Jackson brought the entire staff together … from the gardening staff to the kitchen staff and everybody in between … and indicated our new job was to nurse our guests back to health.  Whether it was brewing a special cup of tea for our ailing guests, or bringing cold towels for their foreheads, or delivering medications, nursing them back to health was our new priority.

When there was a job to be done, Mrs. Jackson dismissed job titles and organizational silos.  She would not abide by her staff saying such things as, “That’s not what I signed up for when I took this job.”  Hogwash!  Her approach was simple and straightforward:  If there was a job to be done, do it.  And she was right in there, leading by example, doing the very same things we were doing in trying to help our guests.

Even though we worked from early morning to late evening as servants in the mansion, there would be occasional breaks in the mid-afternoon.  Those were the times Mrs. Jackson would sit down with a pot of tea and one or more of her teammates.  I’m sure she was as tired as anybody else from the long hours, but she also knew this was a great time to connect with her teammates.

Sometimes the conversation would be simple chit chat. We would learn more about each other … which helped to build our team.  Other times she would hold an informal huddle, asking people what went right on their work shift, what could have been done better, and what ideas might we have for improving our performance.  Again, more team building and continuous quality improvement.

I suspect Mrs. Jackson never knew that she was 50 years ahead of her time.  Because that’s the very thing that the Ritz Carlton hotels do with every employee in every department every day.  No wonder their service is so spectacular. 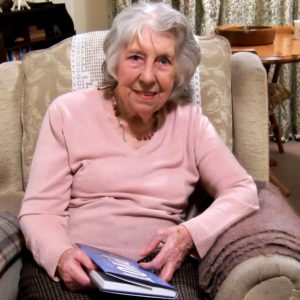 When I finished my employment at Underscar, I did not finish my relationship with Mrs. Jackson.  I moved back to America as a young man but never forgot her calmness, her wisdom, and her deep sense of caring for each member of her staff.  So I sent her letters.  Dozens and dozens of them, decade after decade.

I wrote about the good times and the bad.  I told Mrs. Jackson about my successes … because I knew she would be proud of me.  I told her about the death of my mother, the loss of my wife, the estrangement of my daughter, and the challenge of an impossible job.  And Mrs. Jackson always wrote back, expressing her care for me, her belief in me, and a couple of ideas for handling my situation.

Are you doing that as a leader?  I hope so.

I will miss Mrs. Jackson.  She passed away about two years ago … but she’s as influential as ever.