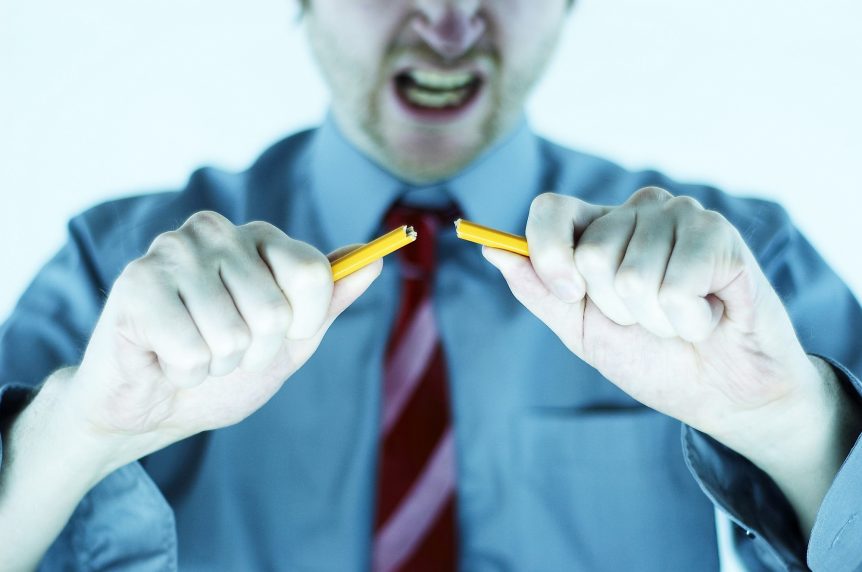 Anger is a neutral emotion. It’s neither good nor bad. Even the Bible says, “Be angry, but do not sin.”

So let me give you seven Do’s when you’re angry.  Because if you Don’t do anger right, it will hurt you, your relationships, and even your chances of professional success.

Take a good look at yourself and accept the fact that you are angry. Don’t put it off as a little irritation or frustration. If you’re angry, admit it … at least to yourself. You can’t deal with anything that doesn’t exist.

So stop telling yourself, “I’m not mad.”  Don’t ignore the fact that your stomach is in a knot and you’re perspiring a little. And don’t rationalize your anger away … telling yourself it’s probably just too warm in the room.

Unfortunately, when you ignore your anger, you always pay a price. You’ll either get emotionally depressed or physically ill. As Oprah Winfrey notes, “What I’ve learned about being angry with people is that it generally hurts you more than it hurts them.”  If you don’t admit it

► 2. Accept responsibility for your anger.

Remember, you chose to get angry.  You could have chosen to feel a variety of things in your situation, but you chose to feel angry. So accept responsibility for your anger.

Of course, it would be easier to blame the other person for making you angry. After all, it’s her fault that you feel so badly, isn’t it?  Because you can point out precisely what she did wrong.

The problem with blaming the other person … rather than accepting responsibility for your anger … is that it almost always makes things worse. You tend to raise your voice and utter contemptuous comments. You say such things as “It’s impossible to discuss anything with you … You’re so arrogant … You never listen … and … Who made you the king of the universe?”

And the other problem with blaming is it keeps you stuck. As long as you blame someone else for your problems and your emotions, you’ll never look at your part in the problem. You’ll never change and you’ll never get better.

So calm yourself … before you speak.  You may need to do some deep breathing first. Or you may need to use some word therapy. Tell yourself calming words or phrases such as “Relax … Take it easy … or … You can handle this.”

People who get angry a lot tend to live with the belief that “Things ought to go MY way!” They feel as though they are morally right, that any blocking of their way is an unbearable indignity, and that they should NOT have to suffer this way. Maybe other people have to, but not them!

Again, if you fall into this second category, you’re taking yourself too seriously. You’re getting too angry too often over too many things.

Dr. Jerry Deffenbacher, a psychologist who specializes in anger management, recommends “silly humor” to help defuse your rage and give you a more balanced perspective for times like that. He says you should picture yourself as a god or goddess, a supreme ruler, who owns the streets and stores and office space, striding along and having your way in all situations, while others defer to you. The more detail you can put into your imaginary scenes, the more chances you have to realize that you may be unreasonable. And you may also realize that some of the things you’re angry about aren’t all that important.

I agree.  That’s exactly what anger does IF you don’t apply logic to your feelings and your situation.

Very angry people tend to have very exaggerated and overly dramatic thought patterns. They tell themselves, “Oh, this is awful. It’s terrible. Everything is ruined.”

Replace these thoughts with more rational ones such as, “This is frustrating and it makes sense that I’m upset about it. But it’s not the end of the world and getting angry is not going to fix it anyhow.”

Be careful of using all-inclusive words like “never” or “always.” When you say things like “This !&*%@ machine never works” or “You’re always forgetting things,” you’re being irrational. Those are not accurate statements and they only make things worse. They make you feel like your excessive anger is more than justified and there’s no way to solve the problem.

This might sound crazy, because angry people often want to talk now rather than schedule something for later. But cooled-off timing and scheduled meetings with your spouse or coworkers may be a very smart way to handle the anger that is bound to occur in any relationship.

Emotionally intelligent managers, for example, want their employees to share their anger and complaints. They may even hold monthly gripe sessions to make sure everything is out in the open and on the table.

After all, emotionally intelligent managers know that every employee has problems with the department. So if the employees aren’t complaining to the manager, they’re keeping everything inside, and the manager won’t know about it until they leave. Or the employees are telling everybody else outside the company … which only hurts the company’s chances of success in the future.

If you decide to hold monthly gripe sessions, don’t hold the meeting in the conference room. Employees will feel like they’re still at work and may not speak freely. Instead, try meeting at a local coffeehouse the first Friday of every month, and do it on company time … not the employees’ time.

And, certainly, set up a few rules for the appropriate sharing of anger and complaints. For example, no name-calling or put downs of individuals. Attack the problem and not the person.

Final Thought:  Deal with your anger constructively.  And when it’s over, it’s over.  As actress Marlene Dietrich put it, “Once a woman has forgiven her man, she must not reheat his sins for breakfast.”

Dr. Zimmerman’s Tuesday Tip, Issue 936 – How To Make Your Anger Work For You