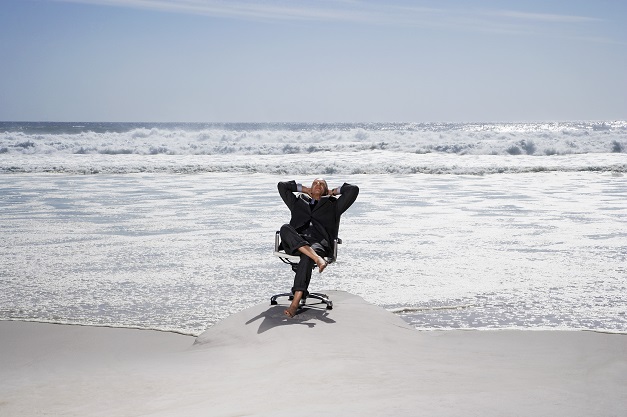 In her book, Quiet Desperation: The Truth about Successful Men, Jan Halper discovered that 48% of all middle managers in her study described their lives as “empty and meaningless,” despite all the hard work they put in to achieving their goals. Somehow, they never learned the art of work-life balance.

And 68% of the senior executives in her study said they neglected their families to pursue their professional goals.  If they could do it over, they all said they would spend less time working and more time with their families.  They didn’t know much about work-life balance either.

Could the same thing be said about you and your work-life balance?  I hope not.

You see, the happiest and most successful people live with one fundamental truth in mind.  And that is, in every moment, the quality of your life is on the line. In each, you are either fully alive or relatively dead.

To be fully alive, wherever you are, BE THERE.  Be totally present.  Squeeze the most out of every second, minute, hour, and day you are privileged to have.   Learn to live … fully … in the present.

► 1. Eliminate unnecessary hurry from your life.

Nonetheless, it’s hard for some people to think of any other way to be successful than to hurry, hurry, hurry. For example, one wealthy businessman was horrified to see a fisherman lying lazily beside his boat, smoking a pipe.

“Why aren’t you out fishing?” asked the businessman.

“Because I caught enough fish for one day,” replied the fisherman.

“Why don’t you catch some more?”

“What would I do with them?”

“You could earn more money,” said the businessman. “Then with the extra money, you could buy a bigger boat, go into deeper waters, and catch more fish. Then you would make enough money to buy nylon nets. With the nets, you could catch even more fish and make even more money. With that money you could own two boats, maybe three boats. Eventually you could have a whole fleet of boats and be rich like me.”

“Then what would I do?” asked the fisherman.

“Then,” said the business man, “you could really enjoy life.”

The fisherman looked at the businessman quizzically and asked, “What do you think I am doing now?”

In a similar sense, eliminate some of the unnecessary hurry in your life. Instead of hurrying to work and arriving there a bit frazzled, get up ten minutes earlier, so you can allow a few minutes to read your morning devotions, take a walk around the block, and literally smell a rose along the way.

Like that fisherman, I would like to help you really enjoy life now.  So next week we’ll celebrate the 1000th issue of the Tuesday Tip in several ways.

First, I’m going to give you 93 Truths for Unlimited Happiness and Success. A special whitepaper I created just for you, my Tuesday Tip subscribers and just for this celebration on August 13th.

Second, I’m going to give away 1000 copies of my best-selling book, The Payoff Principle: Discover the 3 Secrets for Getting What You Want Out of Life and Work.

Going back to today’s article on being fully alive…

Don’t even try to have a nice dinner with your spouse if you’re thinking about all the work you have to do tomorrow. Because even though your body is at the dinner party, you’re not.

And don’t even think you can have a decent conversation with a colleague in your office if you’re glancing at your computer screen or checking your text messages every few moments. Because once again, even though your body is at the meeting, you’re not there.

You need to learn how to focus on one person at a time.

I saw a demonstration of how that could be done at a Delta Airlines counter when several flights had to be rescheduled. People were clustered all around, each with a burning question that couldn’t wait. As I waited for my turn, I became fascinated by the man behind the counter. There he was, pressured by all those people and yet perfectly calm and composed.

Finally when it became my turn, I said, “I’ve been admiring the way you handle the public.”

He raised his head and looked at me squarely and said, “I don’t deal with ‘the public,’ I deal with one person, and then another, and another and another. Now, how can I help you?”

I don’t know exactly what your life is like, but I know this Delta Airline agent has a lesson for all of us, and that is … don’t get over stimulated. Don’t try to listen to three TV channels and two radio stations at the same time. Don’t try to answer the demands of two customers, one boss, one spouse, and four kids all at once.

You’ll be a lot calmer, a lot clearer, and a great deal more pleasant … if you focus on one person … or one input … at a time … whenever possible. That way you can truly BE THERE.

If you really struggle with living in the present, keeping your focus, and putting first things first, remove yourself from all the things that distract you. Detach … occasionally. It’s great practice for a more positive life.

Toni Newman learned to do that. On a recent vacation, she left the following message on her voice mail, “If you get this message, please be aware that I am being held hostage by two wonderful children under the age of six. They have hidden my iPad and my cell phone. They have locked me out of my office and away from my computer. The red light on my phone blinks helplessly but alas, I am forbidden to check my messages. Their demands are simple: two weeks of my undivided attention. If I obey, I will be allowed to return to my office on Monday, August 1st. I look forward to reconnecting with you then.”

Strangely enough, Toni actually left that message on her home as well as her work voice mail. And that takes guts. Most of us wouldn’t want our clients and coworkers to know that we are so detached from business that we couldn’t be reached. It might be interpreted as a career-limiting move.

But Toni did it. And the result? When she got back to work, her clients were so impressed with her candor … and her willingness to stick to her values … that her sales actually shot up.

What about you? Are you living at a frenzied pace? Are you checking your email and text messages every chance you get? Maybe it’s time to realize that everyone needs some time to detach from the hustle and bustle. Even you.

And how are you doing when it comes to scheduling time with your family and friends? Chances are … if those things are not on your calendar, you won’t get around to them.

And once you schedule the time, how well do you honor that time by truly BEING THERE? Make sure you put your mind where your body is.