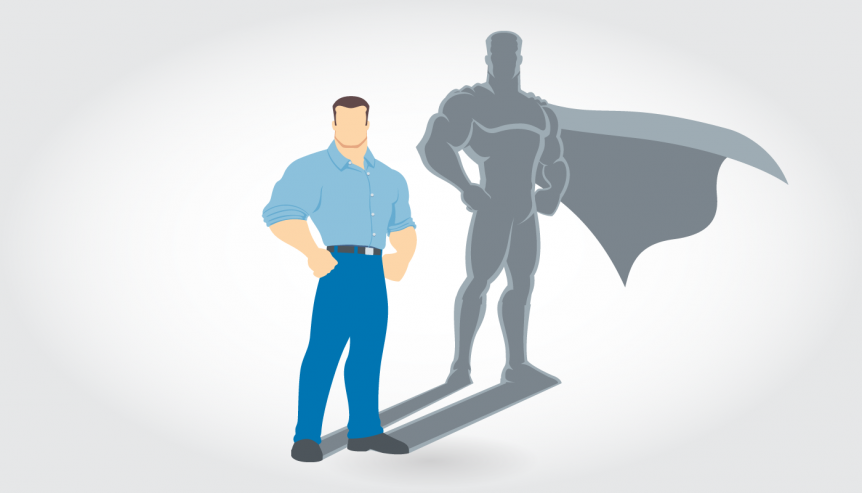 We desperately need heroes … role models … and leaders who inspire us to be more and do more.  And we need people in our lives that help us believe in ourselves and our dreams.

One of mine is Mrs. Cronkhite, my second-grade teacher.  In addition to teaching me reading, writing, and arithmetic, she taught me to be an entrepreneur and businessman.  And with her guidance, I learned to make potholders and sell them door-to-door, selling more potholders than any other kid in the entire school.

More importantly, she taught me a formula for success … that P + P = P³.  A formula that I used to launch a small international import business by age 10, importing everything from watches from France, shoes from Eastern Europe and cuckoo clocks from Switzerland.

You can use that same formula to succeed at everything you want in your life, work, and relationships.

Another one of my heroes used the same formula to not only achieve personal success but also worldwide good.  However, if you read the following lines from this thirty-year old woman’s diary, you would never guess her name.  She wrote: “My God, what will become of me? I have no desire but to die. There’s not a night that I do not lie down on my bed wishing that I may leave it no more. Unconsciousness is all that I desire.”

What a bleak, depressed position to be in!  But when she died 60 years later, it was said that she was one of three people who did the most to alleviate suffering in the 19th century. Her name was Florence Nightingale, the founder of the modern nursing profession.

Somehow or other, Florence picked up and applied this success formula … P + P = P³ … to change everything around.  Florence learned that Preparation plus Perseverance equals Progress. She learned that even though she had to go through seasons of pain, it was still possible to make significant gains in life.

And the really good news, this same formula will work for you.  Here’s how.

1. Progress Toward Success Starts with Preparation.

The news is filled with stories of “overnight successes.”  But most of those stories leave out the hours, days, weeks, months, and sometimes years of work that preceded their success.

The truth is … there are few, if any, “overnight successes” in this world. Progress is almost always preceded by a lots and lots of preparation.  Or as Malcolm Gladwell notes in his book, Outliers, the most successful people in any endeavor have typically put in 10,000 hours of practice and preparation.

I certainly know that’s true of myself and my work.  Even though I’ve delivered more than 2500 keynotes and seminars, have spoken in 49 states and 22 countries … and even though 92% of my business comes from enthusiastic repeat and referred customers … and even though I’m ranked among the top 7% of all speakers with my CSP (Certified Speaking Professional), and am among the top 1% in the Speaker Hall of Fame … I also know that my programs are better and my audience ratings are higher than ever before.   I know there’s power in that 10,000 hour rule.

Long ago professional basketball star Bob Petit intuitively knew that Preparation plus Perseverance equals Progress. He knew that preparation boils down to PRACTICE, PRACTICE, PRACTICE.  Even though he became one of the highest scoring players in the sport, it wasn’t that way in the beginning.

As a freshman in high school, Bob was weak, frail, and uncoordinated. All he really had going for himself was the determination to practice until he became a quality athlete.

Bob began with a wire coat hanger that he bent into the shape of a basketball hoop. Hour after hour, day after day he threw tennis balls through his makeshift basket. Eventually his father got him a real basketball and hoop.

Bob would throw baskets after school every day, go to dinner, and then go back to practice. It wasn’t too long before he became the star of his church team, then his high school team, college team, and finally a professional team.

It’s the same for you and me. There are few shortcuts on the road to success. We all have to prepare or practice first.

And Mister Miyagi knew this in The Karate Kid movie. Even though his young protégé wanted desperately to learn the art of fighting, the master handed him a paint brush instead. He told the boy to paint the fence a certain way. Of course the boy was discouraged and disillusioned. He couldn’t see any relationship between fence painting and ring fighting.

He was even more disappointed when the master instructed him to wash, wax, and polish the car. As he worked his hands in a circular motion over the car, he was demoralized. He couldn’t help but wonder, “How will this help me in my future? How will this help me to be a fighter?”

What about you? Are you giving yourself enough preparation? Are you practicing enough?

If your answer is “yes,” congratulations!  Add some perseverance to the mix and your success is almost a foregone conclusion … because …

2. Progress Is Ensured with Perseverance.

Henry Wadsworth Longfellow, a great American poet, wrote, “Perseverance is a great element of success. If you only knock long enough and hard enough at the gate, you are sure to wake up somebody.”

He’s right. You’ll wake up your potential and you’ll be headed for success.

Wadsworth seemed to know that, more often than not, failure is the path of least persistence.  If you’re not succeeding as often as you’d like, you may not be hanging in there long enough. You may be quitting too quickly.

If you need to be more persevering, spend more time focusing on what you want to achieve. Think about it. Dream about it. See it. Feel it. Taste it. Smell it. The stronger your focus, the more perseverance you’ll have.

Buddha knew that. When a young man came to seek his advice, to discover the path of deliverance, Buddha led him down to the river. The young man assumed he was to undergo some ritual of purification. So they walked out into the river and suddenly Buddha grabbed the man and held his head under the water.

The man struggled and fought. After a great deal of effort, the young man wrenched himself loose and brought his head above the water.

Quietly Buddha asked him, “When you thought you were drowning, what did you most desire?” The young man gasped, “Air.”

Buddha said, “When you want salvation as much as you want air, then you will get it.”

Likewise, when you really, really, really want something, you will have the perseverance you need to achieve the success you desire.

So perseverance starts with great desire, but it shows up as a calm stick-to-ativity. Senator Robert Taft, one of the great politicians of the 20th century demonstrated that. Early in his political career he went into hostile territory to make a speech. Someone threw an over-ripe tomato at him. It hit the Senator in the chest and burst all over his face, glasses and hair.

What did he do? React with anger? Lash out? Quit? No. He didn’t wipe his face, glasses, or hair. He just went on giving his speech and never even referred to the tomato. When he finished, he stepped down from the platform and said, “Good bye boys,” in a friendly manner. As Senator Taft walked down the aisle toward the door, the once hostile crowd gave him a standing ovation.

That’s what I call “class” on the Senator’s part. And that’s how persevering people get through adversity. They just keep on keeping on. They don’t get distracted.

Donald Bennett showed the same calm stick-to-ativity. As a successful Seattle businessman, he always wanted to climb Mt. Rainier. The mountain was so enticing, so beautiful, but very few ever climb it because the weather makes it impossible most of the time.

Donald trained and trained until he was given permission to climb the 14,410’ mountain. The time eventually came, and he climbed 14,000 feet. But the weather forced him to turn back, which meant he had to wait another year.

Many people would be too disappointed to try again and they would quit. After all, they gave it a try, but it just didn’t work out.

Not Donald. A year later, Donald Bennett stood on the top of Mt. Rainier–on his one leg. He was the first amputee to make it to the summit. When a reporter asked him how he did it, Donald said, “One hop at a time.”

If you desire to be a champion, if you want phenomenal success, it will be hard. What else could you possibly expect? If it wasn’t hard, everyone would be doing it.

Starting today, get honest with yourself. Stop making excuses and tell yourself over and over again, thousands of times if necessary, that, “I will keep on keeping on until I succeed.” This affirmation will work for you. 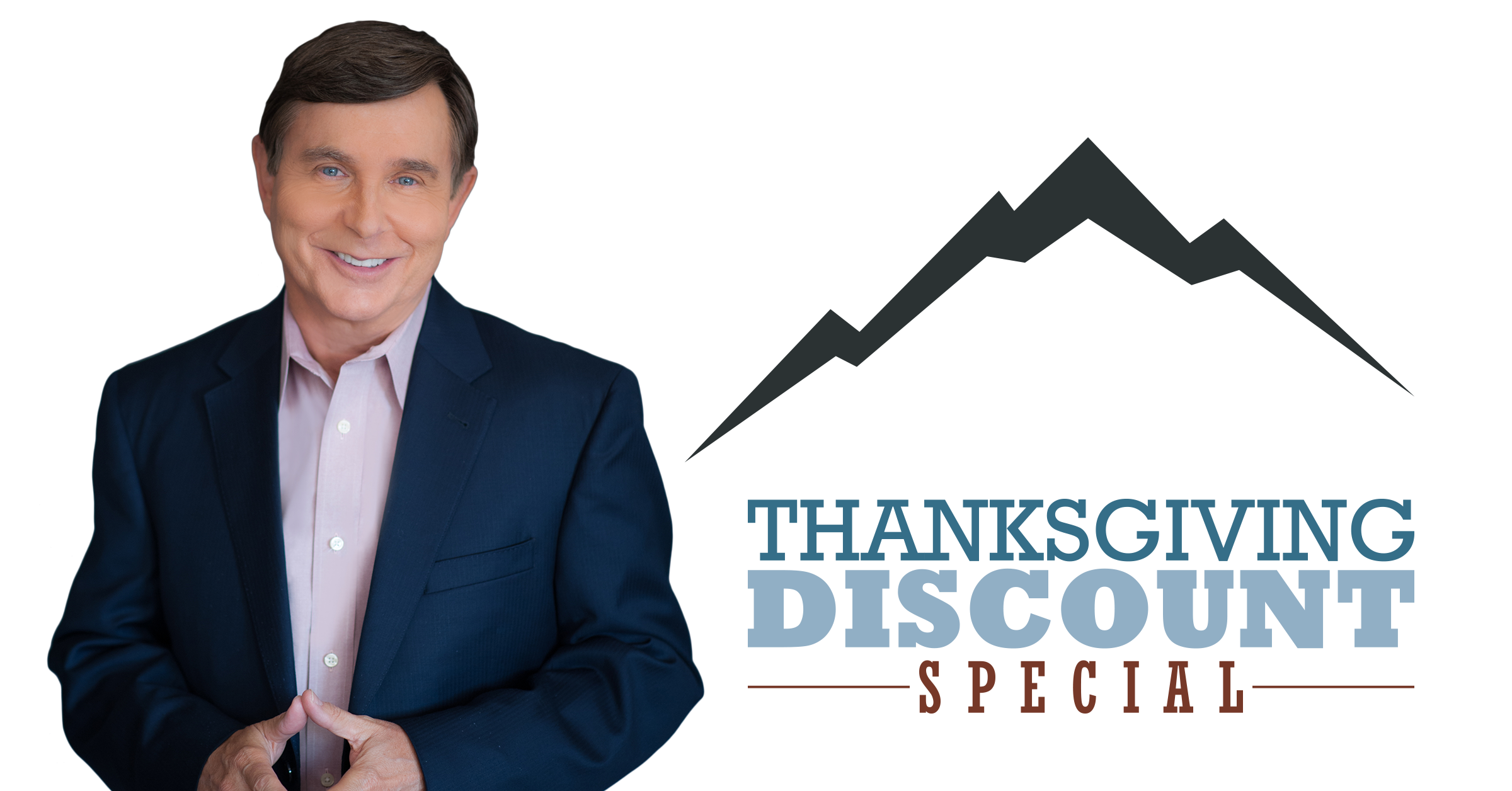 You still have time to shop the biggest sale ever on my best-selling books, .mp3 albums, webinars, and eBooks. You can get these life-changing, work-transforming resources for 80%, 85%, even 90% of the regular Internet price. Why the deep discounts? Because it’s Thanksgiving week, and I’m thankful for you!

Just use the links below to shop the sale, but act fast – the deals on these exclusive products will expire at 11:59pm EST on Wednesday, November 30th, 2016.

The Thanksgiving Nibble – 85% Off!