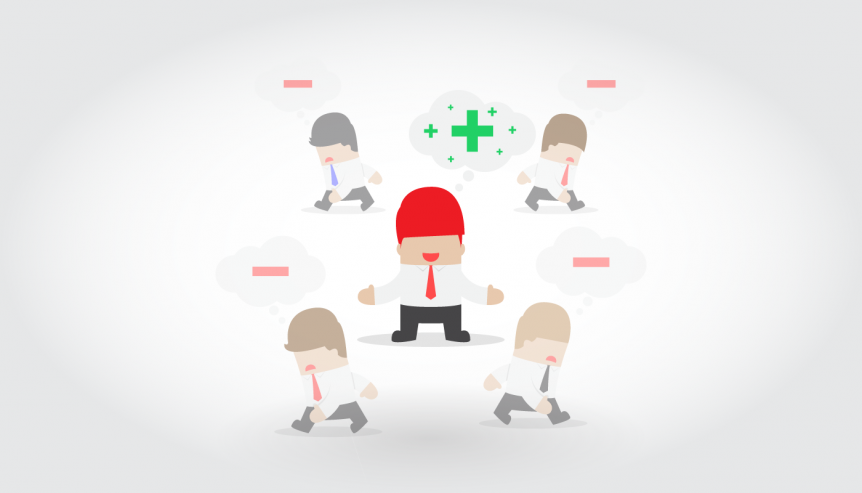 The great violinist Paganini was performing before a most distinguished audience. Suddenly, one of the strings on his violin snapped. The audience gasped, but the master musician continued unruffled to play on the three remaining strings.

Snap! A second string broke. Then, with a sharp crack, a third string broke! For a brief moment, the artist stopped, raised his famous Stradivarius violin high and with one hand announced, “One string — and Paganini.”

With outstanding skill, he finished the selection on a single string. His performance was flawless and the audience gave him a tumultuous standing ovation.

There will be times in your life when one string after another will snap. And you will go through circumstances that might tempt you to give up. But you don’t have to give up … if you have a positive attitude working for you.

Here are four ways you can create a positive attitude for yourself.

When the tough times come into your business or into your life, it’s easy to get angry, agitated, or scared … none of which helps anything. In fact, the more emotional you get, the less capable you become.

Instead, force yourself to remain calm – even though you don’t feel like it. Not only will your calmness allow your mind to work, but you’ll also find that your calmness reinforces your own positive attitude. It’s a way of re-affirming yourself — that you can handle it.

That’s exactly what Thomas Edison did. On a freezing night in December of 1914, he was financially strapped as he worked on his ten-year project to build a storage battery. Someone shouted, “Fire,” and within moments his entire manufacturing plant was in flames.

The next morning, Edison called all of his employees together and made an incredible statement. He said, “We’re rebuilding.” He told one man to lease all the machine shops in the area. He told another one to get a wrecking crane. Then, as an afterthought, he asked, “Oh, by the way, anybody here know where we can get some money?”

Then he yawned, rolled up his coat for a pillow, curled up on a table and immediately fell asleep. Edison stayed calm.

I’m sure he had some feelings of disappointment and discouragement. That seems fairly normal. But he didn’t let his feelings take over. He did what needed to be done. He stayed calm. And so should you when the tough times come.

Recently Joan Baca wrote to tell me how staying calm and having the right attitude saved her, in more ways than one. Joan said,

“While working on my house I fell from a ladder, crashing 14 feet on to a concrete pavement. After seven weeks off of work, I’m back to my job and quite lucky to be walking and talking … because I know that kind of accident could have killed or paralyzed me. While recovering I kept asking what made the difference for me. Instantly I knew it was the attitude skills I learned at the Journey.

I learned to focus on what I was able to accomplish rather than the things I could not do. I practiced an attitude of gratitude. And I have to admit if this had happened prior to your Journey to the Extraordinary program … where I learned all these attitude skills … I wouldn’t have had the same outlook. I would have drowned in self-pity. Again a huge THANK YOU for all you taught me at the Journey program.”

2. Refuse to Blame Anyone or Anything for Your Problems.

That’s not easy. And it’s not natural. After all, your company, your boss, your parents, your friends, and your spouse might even deserve some blame.

The problem is it doesn’t work. It doesn’t change anything and it doesn’t make anything better. All blame can do is keep you stuck or make you spiteful, neither of which will make you more positive or turn you into a winner.

Take your job, for example. Maybe you feel stuck in a job that is going nowhere or maybe you think your company is doing nothing to invest in your career development. A loser could spend hours in the employee lounge talking about those issues, blaming the boss or the company.

Nonetheless, a critical step in positive attitude development is refusing to blame. Even though it may be justified, don’t do it.

Take those identical twins, for example. They were raised by an almost constantly drunk, alcoholic father. At age fourteen the twins were sent to separate foster homes, not to be reunited for some thirty years.

Simply put, it wasn’t so much their difficulty that made the difference in life. It was their attitude that made them a winner or a loser. So don’t blame anyone or anything for your problems.

3. Focus on the Positive.

An old ditty says it this way:

“As you go through life, brother,
Whatever be your goal,
Keep your eye upon the doughnut,
And not upon the hole!”

Some people focus on the hole. But the strategy seldom, if ever, works. You’ve got to stop keeping track of the negatives – like some people do.

Perhaps you’ve noticed. On a bad day, some people tend to count every irritation or inconvenience that occurs. They’ll burst out with, “This is the third time today something like this has happened.” Yet seldom on a good day do these people say, “This is the third time today something great has happened.” Keeping track of the negative simply gives you a weak and defeated negative attitude.

You’ve got to focus on the positive like Frank did – even though his constant optimism irritated his friends. No matter how horrible the circumstances, he’d remark, “It could have been worse.”

4. Refuse to Use a Loser’s Language.

At that point he picked up his bat and ball. With a smile on his face, he walked off the field and said, “I’m the greatest pitcher in the world.” He refused to use the language of a loser. He only talked about winning and so should you.

Concluding Thought: Tough times will come. You may get knocked down at work or in life. But with the right attitude, with the four skills I just discussed, you can get back up and get back on the track to success.