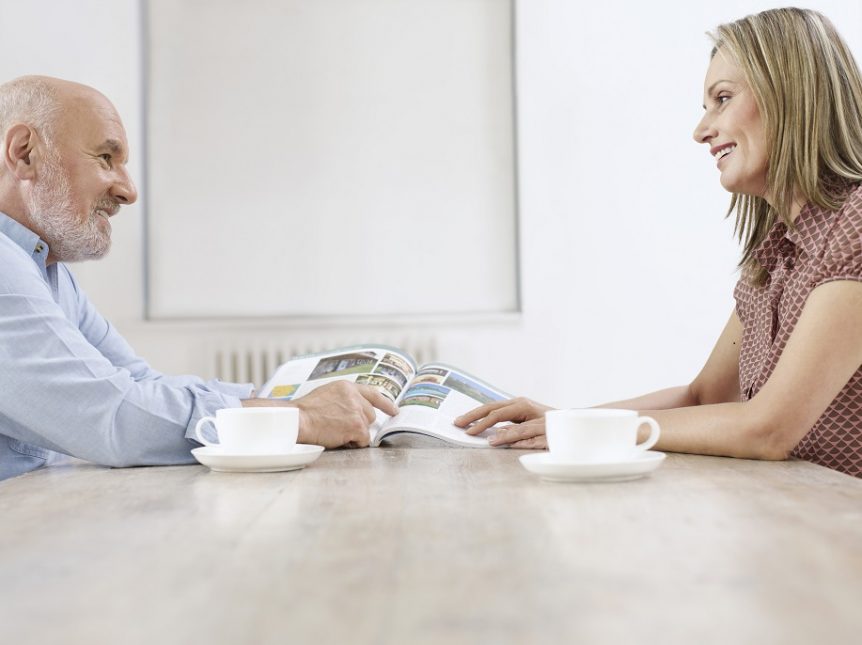 And to me, that’s sad, as well as frightening, because listening is literally the difference between life and death in a country as well as in a relationship.

That might sound like an exaggeration, but it’s not. We learned that hundreds of years ago when the English cemeteries were running out of space. They would dig up coffins and take the bones to a bone-house and reuse the grave. When reopening these coffins, 1 out of 25 coffins were found to have scratch marks on the inside and they realized they had been burying people alive.

To avoid that tragedy in the future, they began tying a string on the wrist of the corpse, leading it through the coffin and up through the ground, and tying it to a bell. Someone would have to sit out in the graveyard all night (the graveyard shift) to listen for the bell. Thus, someone could be saved by the bell or was considered to be a dead ringer. In those cases, listening was literally the difference between life and death.

The same is true in relationships. When I coach teams or counsel couples, I can tell immediately if those relationships are dead or alive by looking at the quality of their listening.

That being the case, let me suggest a simple way you can increase your listening effectiveness immediately. Use the LISTEN acronym.

You must find something you like about the person you’re listening to or you probably won’t listen to them.

For example, millions of people categorize our various political candidates as the epitome of evil or the height of incompetence, neither of which is 100% true. And as a result, they automatically tune those people out whenever they speak. That’s not very smart, if you aspire to be a fully informed individual.

► I = Interest yourself in the other person

It’s very difficult to listen to someone if you’re not interested in the other person or what he has to say. I would suggest, however, that everyone can be interesting, if you dig deep enough.

I re-learned this lesson while I was working in London. After I finished my presentation to my client, I stopped in a nearby tea shoppe and was soon joined by a 90-year old gentleman who asked if he could share the table. Instead of presuming he would have nothing of interest to share with me, I decided to show interest in him. I asked a couple of questions and soon found myself in the midst of the greatest conversation I had had in a long time. Turned out this gentleman was Commodore Charles Clarke, a former POW in the German concentration camp made famous by the movie, The Great Escape.

By “seeing,” I’m not referring so much to the use of your eyes as the use of your heart. “See” the other person so they feel noticed, heard, and appreciated rather than invisible.

In essence, most everyone is starved for the attention of a good listener! And this tremendous universal need means that listening is well worth the time it takes … because when you’re good at it, people buy more from you, open doors to important contacts for you, work harder for you, and even love and respect you.

► T = Touch the other person

Again, this doesn’t necessarily mean touching in the physical sense. Listen in such a way that you touch the other person’s feelings in a positive way.

You could do that by giving some positive feedback. That’s what Margaret Pederson did. She attended my two-day Journey-to-the-Extraordinary program last year at the age of 92. That impressed me. But what really “touched” me was her feedback. She said, “I heard you speak 30 years ago and your presentation changed my life. I bought an audio copy of your talk, listened to it dozens of times, eventually memorized it, and typed it out word for word, and have used what you taught me ever since.”

You could also “touch” the other person with encouraging nonverbals as you listen to them. Instead of scowling, sneering, shaking your head, or rolling your eyes while the other person talks, give some subtle nonverbal encouragement, which is not the same thing as agreement. Say such things as, “Uh-huh… I see… Oh yes… Mm Mm.” Give good eye contact or nod your head as sign that you are following along with respect.

► E = Empathize with the other person

Somehow or other, you’ve got to show the other person that you understand what they are thinking, feeling and saying. Paraphrase some of their major points by saying such things as: “If I understand you correctly… What I think you’re saying is… It sounds like you’re feeling… and… So the bottom line seems to be…” When people know that you know what they’re thinking, feeling and saying, a huge degree of trust enters the relationship. Animosity is replaced with trust and argument is replaced by conversation.Finally,

► N = Need the other person

Being needed is the ultimate compliment. It reassures the people you are talking to that they are important, recognized, and respected.

A good way to communicate your need for the other person is to emphasize the words “need” and “important.” Say such things as: “I need to hear what you have to say … I need your input on this project … or … Your thoughts are very important to me.”

When you become a good listener, you build rapport with other people. When you become a great listener, people will do everything in their power to maintain that rapport and help you succeed. As motivational speaker Zig Ziglar used to say, “You can get everything you want in life if you just help enough people get what they want.”

And what do they want? They want you to LISTEN!!!