Or are you known for taking it easy?  Not overdoing it?  And waiting for someone else to tell you what to do?  You’re known as a thief.  You’re stealing from yourself; you’re stealing from the success you could have on and off the job, because you lack initiative.

The truth is you’ll never get ahead at anything if you don’t take initiative.  So how can you fuel your INITIATIVE?

► 1. Be honest with yourself

If you’re not getting ahead in your work life or even your love life, you’re probably guilty of waiting for things to happen instead of going out and making things happen.  Admit it.  Don’t blame your problems on somebody else, whining that you never had a chance, or someone else always gets the breaks.

Understand this:  if you fail to take initiative, it will bring you down. The playwright James Albery talked about that when he wrote:

“He slept beneath the moon,
he baked beneath the sun.
He lived a life of going-to-do;
and died with nothing done.”

By contrast, comedian George Burns noted, “Don’t stay in bed, unless you can make money in bed.”

Don’t be paralyzed by it. No matter how much adversity you’ve gone through, don’t let it kill off your initiative. After all, everyone goes through adversity.

But it’s the champions in life who keep on taking initiative despite their adversities. When things go wrong, they tell themselves to “Get over it!” 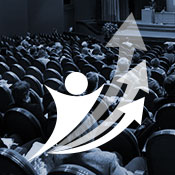 Maybe it’s time to UP Your Attitude, one of my most requested keynotes and seminars because of its power to transform lives, relationships and careers.

And most people don’t. Oh, they may read a magazine, a blog, or a romance novel, but that kind of reading will seldom, if ever, build your character, fuel your initiative, or give you greater success. I’m talking about some serious reading that will improve your life and assure your future.

Unfortunately, only one-third of adults read an entire book after graduation. They view learning as an event instead of a process. And they view reading as a PERIOD in life rather than a WAY of life. So it’s no wonder they lack initiative and don’t go as far as they could.

Sidney J. Harris, the journalist, commented on how differently successful and unsuccessful people view learning. He noted, “A winner knows how much he still has to learn, even when he is considered an expert by others. A loser wants to be considered an expert by others, before he has learned enough to know how little he knows.” It’s a matter of attitude and initiative.

If you will take initiative to keep on reading, you will increase your income by 230%. Now that sounds outlandish, but according to statistics compiled by the U.S. Department of Labor and from a survey by Yahoo, business people who read at least seven business books a year earn over 230% more than people reading but one book a year.

Don’t ever do just enough to get by. Do more than is expected. Show some initiative.

Such was the case in ancient times. A king had a boulder placed on a roadway. Then he hid himself and watched to see if anyone would remove the huge rock. Some of the king’s wealthiest merchants and courtiers came by and simply walked around it. Many loudly blamed the king for not keeping the roads clear, but none did anything about getting the big stone out of the way.

Then a peasant came along carrying a load of vegetables. On approaching the boulder, the peasant laid down his burden and tried to move the stone to the side of the road. After much pushing and straining, he finally succeeded. As the peasant picked up his load of vegetables, he noticed a purse lying in the road where the boulder had been. The purse contained many gold coins and a note from the king indicating that the gold was for the person who removed the boulder from the roadway.

The peasant learned what many others never understood. The big prizes always go to those who take the most initiative.

The peasant took the initiative to do more than the bare minimum. He didn’t settle for less when more needed to be done. And neither should you. As author Dan Kennedy says, “What you are willing to accept is what you get.”

Without a doubt, the champions in this world are characterized by initiative. Just like the comedian, Gracie Allen. She said, “I’d announce that I was going to sing and all our guests would make a ring around the piano. But somehow I’d manage to fight my way through that ring and sing anyway.”

Just remember, there are two little words that make all the difference… and they are … START NOW!