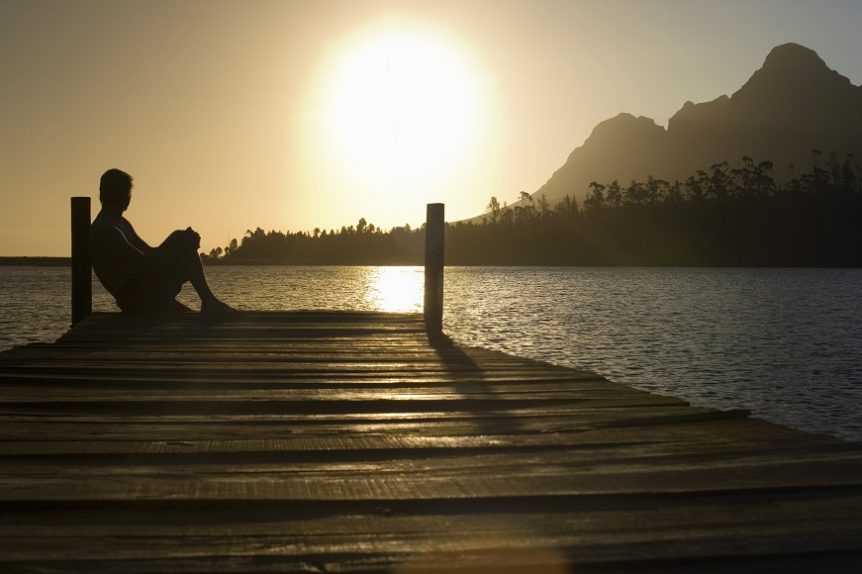 Imagine going on a leisurely drive through the countryside with a couple of your friends … but you’re not feeling well, unfortunately. So when someone calls your attention to a lovely lake, you don’t give it much notice. After all, you’re not feeling well. And when someone else comments on a magnificent mountain in the distance, you hardly hear him.

The next day you recover. You feel fine. You go on the same drive as before, visiting the very same places. But now, everything is completely different. You enjoy the lovely lake and magnificent mountain. You enjoy yourself.

And in our world of personal, corporate, and national anxiety, I would suggest that the main cause of stress is not COVID-19, the economy, the election, domestic terrorism, international threats, or environmental conditions. The #1 cause of stress is messed-up beliefs.

You see … on your imagined road trip above … you did not see things as they were. You saw them as you were.

When you’re filled with gloomy, inaccurate, screwed-up, self-defeating beliefs, you’re going to have stress rather than happiness and success.

And I suspect just about every one of you reading this Tuesday Tip has one or more messed-up beliefs that is damaging one or more parts of your life, career, and relationships. Here’s how you can turn that around.

One teacher helped his students learn this lesson by asking his class to put all their nickels on his desk. He then went on to explain, “If you have a bad foundation or a belief that isn’t accurate, your life will always be filled with struggle and anxiety.”

Sound like anybody you know? I can name several.

To illustrate the point, the teacher pulled a badly bent nickel from his pocket and put it on his desk. He asked the students to start stacking their nickels on top of it. The stack collapsed after six nickels, but they kept on trying … getting the same results every time.

He looked at his students intently, held up the bent nickel, and said, “You can never stack fast enough, work hard enough, or be sincere enough to make up for a ‘bent-nickel’ belief. Make sure your beliefs are accurate.”

So true!!! Messed-up beliefs steal your joy, trash your goals, sidetrack your career, and destroy your relationships.

► 2. Remember you CAN eliminate your messed-up beliefs.

Take Carl Jordan, for example. Even though Carl was a successful Equipment Management Consultant, he was struggling with a lack of confidence. He would even tell his family and friends how much he disliked himself. He said, “Replacing my messed-up low self-esteem with confidence in my abilities was my primary reason for attending The Champion Edge Master Class. I followed your suggested confidence-building steps, and now I have the confidence and security that I had desired for so many years. Thank you so much for opening my eyes to what I can do if I believe in myself.”

Not too long ago, Carl sent me a follow-up note that said, “The most rewarding days of my life have all come after taking your Champion Edge Master Class.”

Give yourself the same motivating, results-producing gift Carl gave himself. Join The Champion Edge Master Class starting this Thursday, September 3rd. We’ll meet from 5 to 6:30 pm Eastern Time, every Thursday until October 8th. I absolutely guarantee your satisfaction.

► 3. Make fun of the stress-inducing belief: “I shouldn’t have to put up with this.”

That’s what some frustrated losers tell themselves. And with a belief like that, they’re stuck.

By contrast, adopt the self-empowering belief: “There is always something I can do.”

The great late poet Maya Angelou talked about that on her 70+ birthday when she was being interviewed. When asked how she felt about getting older, she said it was “exciting”.

When asked about all the changes in her body as she aged, she answered there were many changes occurring every day … like her br–sts. “They seem to be in a race to see which will reach her waist, first.” The audience laughed so hard they cried … as they grasped the profound wisdom of her comments.

Angelou held the self-empowering belief that “there is always something I can do” … which may be something as simple as finding the humor in her situation. And you can do the same thing.

► 4. Challenge the stress-inducing belief: “It’s too hard. I just can’t take it anymore.”

Yes, you can! When you catch yourself using that whiney comment, boldly pronounce this self-empowering belief: “I have handled tough situations in the past and can handle this one now.“

Author Barbara Pletcher says, “The real winners in life are the people who look at every situation with an expectation that they can make it work or make it better.” Indeed, you may be more of a winner than you give yourself credit for.

► 5. Reconsider the stress-inducing belief: “I don’t have time.”

Everybody has the same amount of time and yet, it is absolutely astounding how much some people get done and how little others get done. It’s all a matter of priorities and organization. If you know what’s important … and put first things first … you won’t have nearly as much stress. And you’ll be a lot more productive.

The next time someone asks you how you’re doing, be careful of saying something like “busy, busy, busy.” The more you talk about it, the more stressed out you’ll feel.

And the next time someone asks you to do something and you’re tempted to answer, “I don’t have time,” stop and think. How important is that other person in your life? How important is their request? Then remind yourself that you live by this self-empowering belief: “I make time for the important things.” It puts you in charge of your life.