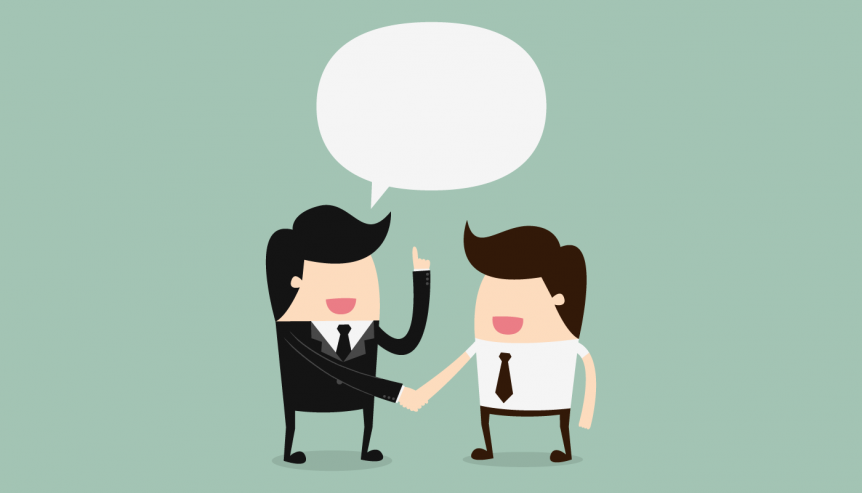 If so, you must not fall victim to a huge myth floating around out there … that people only change (or buy something … or cooperate) when they need to.

NO! People only change when they WANT to.

That being the case, your challenge is to know how to pump up the WANT-TO factor in other people so they want to do what you want them to do. I suppose that’s why my keynote and seminar on 4C Leadership: Communication, Cooperation, Commitment, and Change is one of my most popular programs.

It’s like the little prospector who walked into a saloon, wearing clean new shoes. A big Texan said to his friend standing at the bar, “Watch me make this dude dance.”

He walked over to the prospector and said, “You’re a foreigner, aren’t you? From the East?”

“You might say that,” the little prospector answered. “I’m from Boston and I’m here prospecting for gold.”

“Now tell me something. Can you dance?”

“No sir. I never did learn to dance.”

“Well, I’m going to teach you. You’ll be surprised how quickly you can learn.”

With that, the Texan took out his gun and started shooting at the prospector’s feet. Hopping, skipping, jumping, by the time the little prospector made it to the door he was shaking like a leaf.

About an hour later the Texan left the saloon. As soon as he stepped outside the door, he heard a click. He looked around and there, four feet from his head, was the biggest shotgun he had ever seen in the hands of the little prospector.

The prospector said, “Mr. Texan, have you ever kissed a mule?”

“No,” said the quick-thinking Texan, “but I’ve always wanted to.”

Obviously, the prospector knew how to pump up the Texan’s WANT-TO factor. So what can you do to increase a person’s want-to factor? I recommend these three strategies:

1. Show Genuine Interest in the Other Person (and Their Ability to Change).

If you don’t show genuine interest in the other person, you can’t expect him to be interested in what you want him to do. But if you show a real interest, you’re at least opening the door to change.

Human relations expert Dale Carnegie knew all about that. He said, “You can make more friends in two weeks … by showing interest in others … than you can in two years … trying to get others interested in you.”

The best way I know of showing interest in others is to use my Brave Question technique. Ask the other person such things as, “What’s most important to you when it comes to … your job … your family … your goals … your future … your hobbies … or whatever.” Ask whatever questions that show a real interest in the other person’s story, past, present, and future.

Kirk Billiter wrote: “Alan, shortly after hearing you speak in Bloomington at our insurance company, I purchased your book, Brave Questions. Actually, I purchased two … one for me and one for my college-age daughter.”

“Last week my wife and I were to meet up with my parents and my daughter for a short vacation. I took along the Brave Questions book in hopes of using it for a conversation starter during our evening meals together. Since my daughter and her boyfriend were to arrive several days after my parents, I thought I would test out the questions on my parents first. My parents (now in their 70’s) had never openly shared their past with me, but I also know that I was never one to ask many questions. Well, now I had a tool to help me do that.”

“The first night using your book as a guide, I was amazed how eager my parents were to answer the Brave Questions in such detail and excitement. Although I had heard a few of the stories before, I found out so much more about their lives by using your questions. The second night we got through fewer questions, but the depth of the answers provided much more open dialogue. Several of my father’s stories spilled over into our evening coffee and dessert on the screened-in porch.”

“On the third day my daughter and her boyfriend arrived at the cabin. We were all excited to see her and spend time with her. As she was unpacking, she pulled out her copy of Brave Questions and said, “I hoped we might use them this week during our evening meals.”

Her grandfather smiled at her and said, “You’re too late honey, we have already covered all the real juicy questions the last two nights!”

“Our family continued to use your Brave Questions book during our entire week-long stay. Much like your testimony of using these questions, we also found that our family changed as a result. We now have a much deeper respect for one another as a result of all of us answering these Brave Questions.”

You can pick up your own .pdf or paper copy of Brave Questions by clicking here. And then, to increase someone’s WANT-TO factor…

Simply put, people say “yes” a lot more often to people they like. And the more the other person likes you, the more she will “want to” change for you or cooperate with you.

Direct sales organizations have tapped into this principle with great success. Just think about the selling power in home parties for such great organizations as Mary Kay, Tastefully Simple, or Wildtree. The attendees aren’t being sold a product by some anonymous salesperson; they’re buying a product from a friend they know, like, and trust.

Of course, I could do a whole seminar on how to be more likeable. For starters, smile. Listen. Do random acts of kindness.

And keep your promises. It’s hard to like people who say one thing and do another.

In fact, the first question every team member asks is, “Do I trust my boss and the other members of management?”

In many cases, the answer is “no.” Back in 1995, DDI reported that 56% of employees around the world viewed lack of trust as a major problem in their organization. And the scores haven’t improved much in the 20 some years since then.

If you want people to want to change, then they’ve got to trust you and your integrity. In the Listen Up book, the authors state, “Today’s most sought-after job perk is integrity. That’s right! Corporate integrity is at the top of employee ‘wish lists’ as they look for first or new jobs.”

Of course you may be wondering if the other people in your life and work actually trust you. One good sign is whether or not they feel comfortable enough to challenge you and your authority once in a while.

That’s often not the case in many organizations. In their book, Medication Errors: Causes and Prevention, Cohen and Davis cited a Harvard University study that found 10% of all cardiac arrests in hospitals are due to medication errors. And, they said, the problem is largely caused by the reluctance of healthcare workers to challenge the boss or doctor.

They even cited the case of the “rectal earache.” A physician had ordered ear drops for an infection in a patient’s right ear. Instead of saying “right ear,” he abbreviated his orders to read, “Place in R ear.” Even though the treatment made no sense, the duty nurse promptly put the prescribed number of drops into the patient’s bottom.

Final Thought: Fish eat when they’re hungry (when they want to), not when you drop the line.

Dr. Zimmerman’s Tuesday Tip, Issue 885 – How to Get People to WANT to Do Something