“Never react emotionally to criticism. Analyze yourself to determine whether it is justified. If it is, correct yourself. Otherwise, go on about your business.”

In his book, “Working With EQ,” Daniel Goleman reported a study of Harvard graduates in the fields of law, medicine, education, and business and found that a person’s scores on an entrance exam (which is another way of testing one’s IQ) had no connection whatsoever to that person’s eventual career success. Indeed, just the opposite was the case. In many situations, the higher a person’s entrance exam scores, the lower his/her success later in life.

That’s absolutely amazing. When you think about it, each of those career types focus almost exclusively on intellectual ability to get into those fields, but it was the person’s Emotional Intelligence that carried the most weight in determining who would emerge as leaders in those fields.

So that begs the question, if Emotional Intelligence is one of the best predictors of success, can it be taught? Can people actually learn to be emotionally intelligent? Yes! Absolutely! I teach it all the time … because most people were never taught how to handle emotions such as stress, failure, anger, low self-esteem, and a host of other emotional issues and communication challenges.

When Pam Meehan-Smith, a Customer Service Manager for the US Postal Service, attended my program, she said, “I came to the session believing it would be another ‘touchy-feely, feel-good’ exercise. But I got so thoroughly caught up in Dr. Zimmerman’s enthusiasm and knowledge of the subject that I couldn’t help but learn. More importantly, I took his skills and strategies back to the workplace to make it a MUCH better workplace.”

And Peter Vetter, a Labor Relations Manager for the US Postal Service, reported, “Dr. Zimmerman’s program got me thinking more deeply about my role in shaping my work and personal life. I left the program empowered to bring out the best in others. And it worked like magic!”

Yes, you can learn to be emotionally intelligent. It’s not something you’re born with and it’s not something you inherit. It’s something you learn. In particular, to be emotionally intelligent, you must master four things: 1) Self-Awareness, 2) Self-Management, 3) Social Awareness, and 4) Relationship Management. I’ve written about the first two dimensions in my last two “Tuesday Tips,” so let’s go on to the third dimension of Social Awareness.

1. What does is it mean … the Social Awareness of Emotional Intelligence? 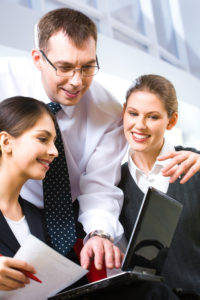 In its simplest terms, you realize that it’s NOT all about me. When you have emotional smarts, you’re able to focus on others, observe their emotions, and notice their actions and reactions. You’re able to ask questions, listen, and learn what other people are feeling. You’re able to understand their perspective and determine what factors influenced them for the good or the bad, even though their perspective and their experiences might be quite different than yours. You are aware of the other person’s feelings, needs and concerns.

However, if you’re a bit short on empathy, if your spouse says “You never listen to me,” and if you seem to be a little disconnected from the people at home or at work, try these empathy-building exercises.

Of course, you may be somewhat unclear as to how effective you are at the Social Awareness piece of Emotional Intelligence. So…

2. Get some feedback on your level of Social Awareness.

Anthony Mersino, the author of “Emotional Intelligence for Project Managers: The People Skills You Need to Achieve Outstanding Results,” developed a quiz along those line. I’ve modified the questions a bit so it applies to everyone. Go through the questions and answer “yes” or “no” to each question.

From my point of view, if you answered “yes” to three or more questions, you NEED to work on your Social Awareness. And if you’re not sure of your answers, if you’re not totally aware of your own behavior, ask five people at home or work … that know you very well … to answer the questions for you. Their responses may be painful to hear, but they will also help you take the next step towards increased Social Awareness.

One young man had to learn that the hard way, as my friend Palani at PAL Vision Associates told me. He told me about a young man who went to apply for a managerial position in a big company. He passed the initial interview, and now he was about to meet the director for his final interview. The director discovered from his resume that the youth’s academic achievements were excellent. He asked, “Did you obtain any scholarships in school?” the young man answered “no”.

“Was it your father who paid for your school fees?”

“My father passed away when I was one year old. It was my mother who paid for my school fees.” he replied.

“Where did your mother work?” The young man said, “My mother worked as clothes cleaner.”

“Never, my mother always wanted me to study and read more books. Besides, my mother can wash clothes faster than me.” said the young man.

The director said, “I have a request. When you go home today, go and clean your mother’s hands, and then see me tomorrow morning.” The young man felt that his chance of landing the job was high. When he went back home, he asked his mother to let him clean her hands. His mother felt strange, but with mixed feelings, she showed her hands to her son.

This was the first time the young man realized that it was this pair of hands that washed clothes every day to pay for his education. After cleaning his mother’s hands, the young man quietly washed all the remaining clothes for his mother. That night, the mother and son talked for a very long time.

The next morning, the young and eager job applicant went to the director’s office. The director noticed the tears in the applicant’s eyes when he asked, “Can you tell me what you learned at your house yesterday?”

The young man answered, “I cleaned my mother’s hands, and I finished cleaning all the remaining clothes. I know now what appreciation is. Without my mother, I would not be who I am today. By helping my mother, I not only realized how difficult it is to get something done on your own, but I also have come to appreciate the importance and value of helping other people.”

The director said, “This is what I am looking for in a manager. I want to recruit a person who can appreciate the help of others, a person who knows the sufferings of others to get things done, and a person who would not put money as his only goal in life. You are hired!”

The new manager worked very hard and received the respect of his subordinates. Every employee worked diligently and worked as a team. The company’s performance improved tremendously. All because this new manager had gained a significant portion of Social Awareness.

As a footnote, let me tell you that a child who is protected and habitually given whatever he wants … develops an “entitlement mentality” and will always put himself first. He would be ignorant of his parent’s efforts. When he starts work, he would assume that every person must listen to him, and when he becomes a manager, he would never know the sufferings of his employees and would always blame others when things don’t go his way.

A child raised this way may be good academically, and successful for a while, but eventually he would not feel a sense of achievement. He will grumble, be full of hatred, and fight for me-me-me.

You can let your child live in a big house, eat a good meal, learn piano, and watch TV on a big screen. But if you want to raise Social Awareness and Emotional Intelligence in your kids, when you are cutting grass, let them experience it as well. After a meal, let your children wash their plates and bowls together with their brothers and sisters. Let your kids know that even though you could afford a maid, you may not have one … because you want your children to experience the difficulty of learning how to work with others to get things done.

Action:  How much have you grown past the point of “It’s all about me-me-me?”  What are you doing to be more aware of and sensitive to the people around you?