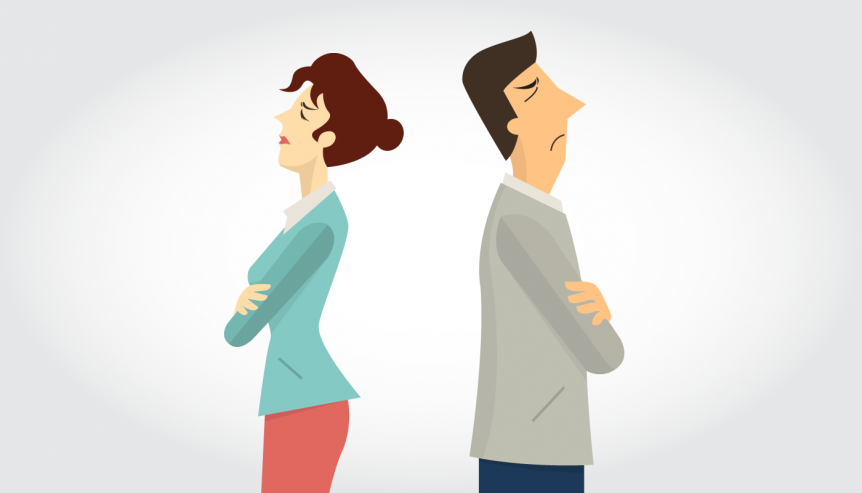 When my daughter was seven, we were watching a TV program that showed a young man and woman jumping into bed together shortly after they had met. I didn’t like the message it was sending to my daughter, so I thought we needed to talk.

So I said, “Shelley, that TV program isn’t real. Typically a young man and woman do not just meet and then sleep together.” She responded, “Oh yes, Daddy. I know all about that. Usually they have dinner first.”

Unfortunately, many people don’t know (or were never taught) how to deal with conflict. That’s why I’m rolling out my new live web conference on 6 Steps To Resolving Any Conflict With Anyone on April 27, 2017 from 2pm to 3pm Eastern Time. Click here for more information or to register now.

You see, it doesn’t matter if you’re working with someone, reporting to someone, married to someone, or just hanging out with someone. Relationships can be difficult – on or off the job. But they’re most difficult when you engage in destructive behavior and don’t bring about a resolution to conflict.

Join me for next Thursday’s webinar to learn the 6 steps to you need to take to effectively resolve ANY conflict with anyone. For now, here are five strategies to help you lay a solid foundation for good communication – especially between the sexes.

1. Be Aware of the Differences in Male-Female Communication Styles.

Political correctness wants you to believe that men and women are exactly the same. But it’s a lie.

Don’t misunderstand. Certainly, men and women are equal (and they should be treated as equals), but they are not the same. As just one example, men and have women tend to use significantly different communication styles.

And both styles have tremendous value. But when males and females try to work together or live together, the differences in their communication styles can lead to added problems instead of problem-solving.

Here are a few key differences:

Once you understand some of the key differences in male-female communication, you also need to know how to resolve the conflicts that will naturally come up as a byproduct of those differences.

Because handling that conflict is so crucial, I’m offering my live web conference on 6 Steps To Resolving Any Conflict With Anyone on Thursday, April 27th, 2017 from 2pm-3pm Eastern Time. I hope you can join me.

So, is there anything you can do right now so you don’t make your conflicts at work and at home even worse than they are now?

The answer is “Yes.” You must avoid four behaviors that will destroy your work and family relationships. If you WITHDRAW, BELITTLE, ESCALATE, OR IMAGINE, you’re headed for trouble.

In other words, when times are tough, you cannot clam up or refuse to talk about it. According to research by marriage expert Dr. Gary Chapman, 85% of failed relationships show a lack of communication. The people didn’t talk or couldn’t talk, so they grew further apart.

There’s some indication that men are more likely to withdraw than women. As one female comedian said, men are like remote controls. She said, “Think about it. They’re made for men. They’re ‘remote.’ They don’t get too close. And they’re in ‘control,’ or at least, they think they are.”

A sick relationship may be like the one the Andersons had. One morning, Mrs. Anderson came up behind her husband and slapped the back of his head. She said, “I found a piece of paper in your pants pocket with the name ‘Mary Lou’ written on it. You’d better have an explanation.”

Mr. Anderson replied, “Calm down, honey. Remember last week when I was at the horse track? That was the name of the horse I bet on.”

The next morning Mrs. Anderson sneaked up behind her husband and whacked him again. The husband immediately complained, “What was that for?” She said, “Your horse called last night.”

It’s like the woman who was waiting for a diagnosis of her husband’s illness. The doctor came to her with a dour expression and said, “I don’t like the look of him.”

The man’s wife said, “I don’t either, but he’s good to the children.”

Shirley said, “I don’t know if I should watch them or the game.” Her husband replied, “Watch them. You already know how to play volleyball.”

4. Do Not Escalate Conflict.

In the midst of conflict, no matter how much you are tempted to say hurtful things, you cannot and should not do so if you want that happy, healthy relationship. You cannot escalate, and you cannot retaliate.

That’s difficult. I’m sure you’ve been in an argument where you’re about to lose your cool. Every bit of your previous training has taught you to shut up, but ooh, you just want this one time to say something nasty. You think it would feel so good to get back or get even.

DO NOT GIVE IN. Don’t say it! One hurtful comment almost always leads to another and another. In the midst of an argument, one woman said, “Sure Moses was lost in the wilderness for years. That’s just like a man. He wouldn’t ask for directions.”

To which her husband responded, “How can you say such things to me and also say you love me? If you really loved me, you would have married someone else.”

Obviously, escalating comments such as these hurt relationships.

When relationships are going sour, it’s easy to see more negative things about the other person than are actually there. This is an extremely dangerous place to be. In fact it’s often the last phase in a personal or professional relationship.

What happens during this phase is the establishment of a negative filter. One or both partners conclude that the other person is bad, worthless, or no good. This conclusion serves as a filter. No matter what the other person does in the future, it is viewed through this filter. It’s all going to be interpreted negatively.

You’ve got to forget the negative imaginations. You’ve got to be humble enough to admit you don’t know the whole truth. You only see it from your perspective. And you’ve got to keep on listening with an open mind and a discerning heart. People can change, and people do change. So leave a little room for that possibility if you want to preserve or build a relationship.

Final Thought: Relationships are more a matter of skill than chance. The more you avoid withdrawing, belittling, escalating, and imagining, the more positive and productive your relationships will be.