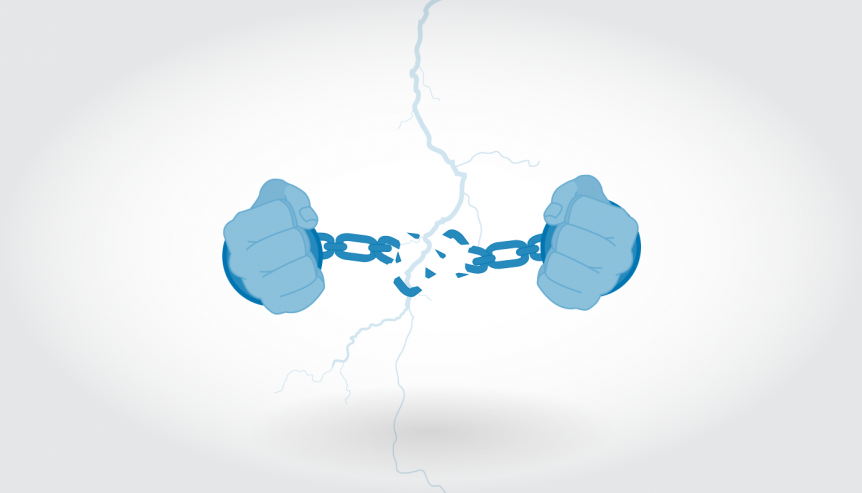 Unlike other children, Sam never made a sound the first few years of his life. As a baby and then as a toddler, he never made the normal “ga-ga” sounds or even attempted to form a word.

Naturally, his parents were quite concerned and so they took him to several doctors to have him examined. The doctors said there was nothing physically wrong with Sam. He had simply fallen into the habit of not speaking.

The family got used to this and nicknamed their son, “Silent Sam.” One morning at breakfast, when “Silent Sam” was eating, he opened his mouth and uttered his first sentence. He said, “This oatmeal is darned lumpy.“

His parents were shocked and they asked the obvious question, “After all these years, why do you finally choose to speak?” Sam said, “Until now, everything has been okay.“

Of course, that’s just a whimsical story, but it illustrates the fact that it’s easy to get stuck in some bad habits. And it often takes a long time to get rid of those bad habits.

That’s because bad habits are the sneakiest little monsters around, operating the same way an invading force does.  They start with a toehold in your thoughts, move on to a foothold in your behavior, and eventually they control you.

That’s why I tell the audience in my program, UP Your Attitude: 6 Secrets that Turn Potential into Performance, “Break your bad habits before they break you.”

And there’s no better time to do that than right now, at the beginning of a new year, when you’re hoping to make this the best year of your life.

To break your bad habits, you need to attack them from many directions. And the more ways you attack this enemy, the greater your chances of success.

Almost always, you’ll have a lot more dislikes on your card. So read those dislikes back to yourself whenever you feel tempted by the bad habit. Your list of dislikes will often be enough to dissuade you from going forward.

Avoid those situations where your bad habits tend to come out into the open.

For example, if you’re more likely to gossip when you’re sharing a cup of coffee with a coworker in the employee lounge, then you should stay out of the lounge if you’re trying to defeat that habit of gossip. If you’re trying to kick a smoking habit, then don’t go outside to the smoking area during your break; go somewhere else.

If you fight your bad habits geographically, you’ll be surprised how much easier it will be to put off your obsessive desires.

There’s a strong connection between the words you use and the behavior you exhibit. So be very cautious about using the word, “habit.” You’re implying that you just can’t help yourself or stop yourself from doing certain things.

Yes, you can!!!  Drop the word “habit” from your vocabulary or at the very least, use the word sparingly.

4. Emotionally – Relax the Habit into Oblivion.

When you’re stressed out, your bad habits are especially powerful. With that in mind, you need to fight back with some relaxation exercises. Close your eyes and picture yourself in a relaxed location. Try some deep-breathing exercises and, as you exhale, let the tension flow out of your body.

Over a period of time, your bad habits will tempt you less often and the temptation will be less powerful.

Create a new image of success to hold in your mind.

If, for example, you have the bad habit of expecting failure rather than success, begin to imagine yourself as successful. Great business leaders do it all the time. They picture themselves walking around their new office in their new corporate headquarters as they’re working at a card table in the garage. Likewise, great free-throw shooters in the NBA picture the basketball going through the net. PGA golfers picture the golf ball going straight down the fairway. These practices condition the mind to control the body to carry out the dream.

Perhaps you have the bad habit of worrying. Your worry might even stop you from doing the good things you need to be doing. That’s what was happening to one of my audience members — until he learned how to mentally attack his bad habit.

“A month ago, I was employed by a large corporation. I had a good job with a steady income. Everything was going smoothly. In fact, I have to admit I was becoming rather complacent. Then the roof fell in.

Because of the economy, my company was forced to lay me off. I panicked. How would I pay my bills or feed my family? It was frightening. I worried and worried for days on end, too paralyzed to do anything.

Then I remembered what you said about using replacement images. I began to visualize myself as a successful businessman. I pictured myself doing all the things I would need to do to be successful.

From there, I lined up interviews with every company I could find. I read the want ads. I followed up every lead.

Two weeks later I found a better job than the one I’d lost. I got a more challenging job with a better salary, and more opportunity.

Thank you for showing me how to kill off my bad habit of worrying and how to get on with life.”

6. Physically – Force Yourself to Do the Opposite.

One day, he made an especially nasty remark to his wife concerning a business associate. His wife had all she could take of his meanness and in no uncertain terms she told him what she thought about his harshness.

Fortunately, he took her lecture to heart and decided to get rid of his bad habit. He began doing the opposite of what he was used to doing. He sought out people with positive attitudes. He avoided conversations in which others were being put down. Whenever he was tempted to say something mean, he would consciously stop himself. Instead, he would look for something kind he could say about the person.

It didn’t take long before people began to notice a change in him. His wife said, “It wasn’t easy for him. So many times he would start to say something and stop right in the middle of a sentence. But today, I can honestly say, I haven’t heard him make one nasty remark in six months. He’s made a habit to say something nice or say nothing at all. I’m really proud of him.“

Like millions of other people, you may have some New Year’s resolutions. That’s fine and dandy, but most people fail because they have some bad habits that get in their way. Use the six strategies listed above and you will have the weapons you need to attack and eliminate your bad habits.

Final Thought: Habits will defend themselves to the death … either their deaths or yours … whichever comes first.