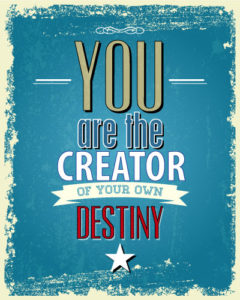 We are living in a day and time when people want to blame just about everyone and everything for their troubles or lack of success. After all, the government spends too much money; our corporations are shipping too many jobs overseas, and many managers and supervisors let negative, nonproductive employees continue to stay on the payroll.

So yes, life and work are unfair, and there is a lot we can … and should … justifiably gripe about. But it’s time to GET BEYOND the griping to taking personal initiative and personal responsibility.

One of my professional colleagues, John Alston often spoke about that. Even though he had to struggle with a deadly disease, he never wasted any of his energy complaining about his disease, and he never let it get in the way of his success … because he knew the difference between destiny and fate. John would tell me and everyone else who would listen, “Destiny is chosen. Fate is not. Fate is the hand you were dealt. Destiny is how you play the hand.”

What about you? Are you choosing your destiny? Personally and professionally? Are you taking all the initiative you need to be taking? It’s a key part of what I teach in my latest program, “The Payoff Principle: How You Can Motivate Yourself to Win Every Time in Any Situation.”

I find that the happiest and most successful people do exactly that. They create their destinies by doing the following. And you need to do likewise.

It’s a key point in the teachings of professor emeritus, Dr. Sidney Simon. Too many people never figure out what they want to do “when they grow up.” So they simply grow older, until one day they realize … they blew it. Their life is about over … much of which they wasted … and there are no do-overs and there are no second chances on all the years that were wasted.

As I teach in my “Journey to the Extraordinary” program, indecision is the thief of opportunity. If you’re going to have a destiny worth pursuing, you’ve got to get out of neutral. You’ve got to do some serious thinking about what you really, really, REALLY want to get out of your life, your career, and your relationships.

You’ve got to do something. You’ve got to take some action with regard to those things you really want. And the actions you take don’t even have to be all that great if you do enough of them. As Vincent Van Gogh recognized, “Great things are not done by impulse but by a series of small things brought together.”

As we teach our children, as we mentor our employees, we often tell them, “Small choices make a big difference.” The same is true of your destiny. Small choices … small actions … can make a big destiny.

David Rabin proved that. As a 46-year-old professor of medicine at Vanderbilt University, Rabin was diagnosed with Lou Gehrig’s disease. He knew what would happen: stiffness in the legs, followed by weakness, paralysis of the lower limbs, and then paralysis of his upper body. Eventually his body would no longer obey his commands. He wouldn’t even be able to speak.

He lost his ability to treat patients and could no longer go to the hospital to work. He would have had a brilliant academic career, but now he couldn’t even turn the pages of a book.

But there was one thing he would not surrender: his spirit! His destiny.

David Rabin still had enough strength in one part of his body — his eyebrow. So for the next four years he used it to speak to his family, tell jokes, write papers, and review manuscripts. He carried on a medical consulting practice. He taught med students. He published a comprehensive textbook on endocrinology and achieved a prestigious award for his work. And he did it with the only thing he could control, a single eyebrow.

He took action. So don’t ever say there’s nothing you can do about your destiny. If David Rabin could determine his destiny with nothing more than an eyebrow, so can you.

As Joe Sabah puts it, “You don’t have to be great to start, but you have to start to be great.”

3. Get going and keep on going … no matter how you feel.

You see … way too many people miss their destinies because they “don’t feel like it.” They don’t feel like doing what they have to do to have the life, the career, or the relationships they want.

Well, to heck with feelings. If you wait until you “feel like doing what you have to do,” you may wait forever. As John Shedd notes, “Success isn’t about spontaneous combustion. You must first set yourself on fire.”

The little known truth is MOTION will lead to EMOTION. Author Frank Tibolt says, “We should be taught not to wait for inspiration to start a thing. Action always generates inspiration. Inspiration seldom generates action.”

So get going … whether or not you feel like it. And then keep on going. As the great engineer and inventor Charles Kettering so wisely observed, “Keep on going and the chances are you will stumble on something, perhaps when you are least expecting it. I have never heard of anyone stumbling on something sitting down.”

Some people figure out what they really want, take some action, but then get stopped by an obstacle or mistaken notion. I call them “destiny detours.”

There are four of them. It’s okay to recognize them, but it isn’t okay to fall victim to them.

The first destiny detour is “lack of talent.” You may think there are so many other people with so much more talent than you that you’ll never achieve your destiny. But the true champions in life take a different approach. They use whatever talents they have, and they refuse to stop using what talents they do have because they don’t have more. As Henry Van Dyke put it, “The woods would be very silent if no bird sang there except those that sang best.”

The third destiny detour is “lack of perseverance.” The losers think if their destiny doesn’t come to pass rather easily it wasn’t meant to be. Baloney! As my colleague Tim Richardson teaches, “D + E + F = G where Discipline + Enthusiasm + Focus = Goal Attainment.”

In other words, destiny is the result of a lot of hard work and perseverance. Or as I advise my consulting clients, “If you’re going through h_ll, keep going.”

And the fourth destiny detour is an “unwillingness to change.” As business philosopher Jim Rohn taught his entire lifetime, “In order to have more, you need to become more.” Unfortunately, the losers say such things as, “If I had a good job I would really pour it on, but I have this lousy job so I just goof off.” If that is your philosophy you are destined to stay there. Unless YOU change, IT won’t change.

It’s the way Michael Jordan did it. For most of his NBA career, Jordan kept his scoring average at 32 points per game. He retired in 1999 with an NBA record 31.5-point-per-game career average. It didn’t’ matter who his teammates were, what offense they were running, what injuries he was nursing, or who was guarding him. Michael Jordan would get his 32 points.

When reporters asked him how he maintained that consistency for more than a decade, Jordan said, “I simplified it a few years ago. Thirty-two points per game is really just 8 points a quarter. I figure I can get that in some kind of way during the course of a game.”

Michael’s consistency is a clear example on how to set your destiny and then achieve it. You start with the desired result or the end in mind (32 points per game), break it down into smaller, doable components (8 points per quarter), and then focus on each component. If you’re successful with the components, you will achieve your destiny.

Michael Jordan knew the secret of reaching his destiny. He knew the first 4 steps but brought it all together in this fifth step. As one wise person said, “There are 2 ways to get to the top of an oak tree; go up limb by limb or sit on an acorn.” Jordan went up limb by limb … and so can you.

Action:  Rank order the five elements of destiny achievement from 1 to 5. 1 is the element at which you are best and 5 is the element that needs the most improvement. Start working on your fifth element today.