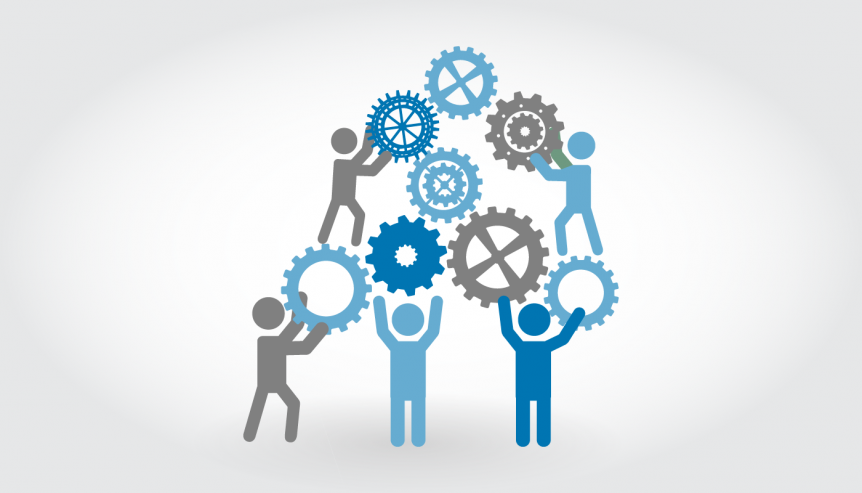 As one of my clients, Lisa DeKrey at Eide Bailly LLP, says, “Everyone has something important to contribute … and it’s high time we find out what that is … and tap into those resources.”

But that brings up a critical question: How can you thoroughly engage people so they do more than take orders? So they take responsibility and perform with excellence.

Let me tell you how two people do it. I know you’ll get a lot out of their stories.

1. Help People Get a VISION of Excellence.

Lots of people don’t even know what “excellence” means. After all, they’re doing their job, getting by, and they think that’s good enough. They’re competent but not excellent.

Jim Collins, the author of the now classic book Good to Great, says that’s dangerous. Collins says, “Competence is the enemy of the great.” In other words, “competence” … or “work that’s good enough” … can blind people to the fact there’s a level of excellence they haven’t even considered.

One real estate sales force moved from get-by, good-enough competence to a vision of and a pursuit of excellence. The broker in charge wanted her office to become one of the top ten in the country. So she collected some magazines and asked her agents to snip out pictures that represented their dreams and ambitions.

Then, at a meeting, she asked each agent to share one picture with the group and put it on the team’s Dream Board. One agent, for example, needed a new car so she put a picture of the car she wanted on the board. As the agents learned about each other’s needs and aspirations, they grew excited for each other and began working harder to make sales. In the end, everyone achieved their goals … or their own individual definitions of excellence … and the team sprang up to sixth place nationally.

And just for the record, it’s very difficult to disguise your expectations. If you expect your coworkers to give you a mediocre performance, your coworkers will sense that … and act accordingly. You’ve got to EXPECT excellence from them.

I think of a high school charity auction where the students made various donations. One student offered to clean house for the highest bidder. One of the bidders was amazed at the steep price a woman paid to obtain this service. Asked why she paid so much, the other woman replied, “It’s worth it just to see my daughter actually cleaning the house.” Obviously, that mother did not expect excellence from her daughter on any regular basis.

The same is true in many work environments. Managers who over-manage or over-see every detail of every function are communicating a lack of trust. They fear failure because they expect anything but excellence.

You need to EXPECT excellence and then when you get it … reward it. And some managers don’t.

Even though this is old advice, it is far from outdated. Almost every candidate running for office in the country right now seems to have forgotten this point.

However, just this week, Linda Katz, the Manager of Safety Administration and Support at the Long Island Rail Road, sent me an inspiring note as to how her boss Loretta (Lori) Ebbighausen serves as an example and the results it’s getting.

As Linda writes, “Hi Dr. Zimmerman: While it seems to be human nature to focus on the bad, wrong or dysfunctional in daily life – i.e. news reports, business, family matters, etc., I admire the fact that you re-focus on the positive and make this your life message.  Well, my boss, Loretta (Lori) Ebbighausen is also cut from the same cloth.”

As Linda continued, “Lori is a woman who has her PHD in Psychology, working in a predominantly male-run business, and serves as the Vice President of Corporate Safety.  I can truly say that she is one of the best and most inspiring bosses I have ever had.  I admire her positive attitude and know that others do as well.” (Note from Dr. Z: That’s leading by example.)

“Lori manages to oversee a current team of 33, deals with both internal and external business partners, and is on-call 24-7 (which is the nature of the job) … in addition to dealing with her personal/family life.  Lori is ambitious, organized, detail oriented, compassionate and fair. She listens to ALL sides of a story or situation before making a judgement call or a final decision.” (Another note from Dr. Z: There’s a whole list of examples that Lori is setting.)

Linda finished her note to me by saying, “I am very fortunate to have her as a boss!”

What a great note. Hopefully it inspires YOU to do something. As much as we all say we’d like to have a boss we respect and admire … who leads by example … it’s partly our responsibility to let our bosses know when they’re doing a great job of leading by example. It’s not fair to expect them to guess how we feel.

So here’s one suggestion. On National Bosses Day, October 17, 2016, take a moment to write a positive note to your boss if he/she has done a great job of leading by example.

And one more suggestion. Take a good look at the example you set. Are you ever guilty of saying, “quality comes first” at your staff meeting and then later allowing some defective products to leave your warehouse because you’re pinched for time? Are you ever guilty of telling your kids to always tell the truth, but when the phone rings you tell them to say you’re not home?

In leading, managing, and parenting, you must help the people around you get a vision of excellence. And then expect excellence from them, at the same time setting an example of excellence in everything you do.

A German proverb alludes to that. It states, “When you walk your talk, people listen.”

There’s one catch, however. Your employees … coworkers … kids … won’t listen to you and they won’t take you seriously until they see you demanding excellence of yourself.

That’s exactly what Sid Slatter learned at my Journey-to-the-Extraordinary program. As Sid wrote,

“I am a 35-year old General Contractor and I first saw you at your Journey program. At that time I never would have seen myself where I am today. I was not a great communicator. I always sat at the back of the class or seminar, hoping no one would call on me or make me get up in front of people and talk. I always had a hard time getting my points and expectations across to my employees. And getting them to respect me and perform for me was very difficult.”

Sid continued, “Well this is why I OWE YOU A HUGE THANKS. In the last two years with your Journey and the continuing help you offer after the program, I joined the local Toastmasters Club and received the blue ribbon for best speaker. I purchased many of your audio CDs and books after the Journey and they have all changed my life.”

Even that, by itself, would be huge. But Sid also wrote, “My relationship with my wife has never been better. I now sit on several boards and have served as president of one. I am involved with my children’s school as the President of the Principal’s Advisory Committee and the chair of the strategic planning committee. I can now accept with confidence the invitation to join the local Rotary Club and not be afraid of giving that speech or networking with the local business community.”

“Through your programs and products, you have drawn out the best in me and improved all of my relationships. You made and continue to make a difference.”

As a personal note, I’ve got thousands of letters just like Sid’s that go on and on about the impact my Journey-to-the-Extraordinary program has had on every part of their lives. I truly hope you will get yourself registered for my next Journey, coming to Chicago, IL on November 10-11, 2016.

If you register before October 20th, you pay only $997 instead of the regular $1497 tuition. Click here to register.

Years ago, F. W. Woolworth, founder of the F. W. Woolworth retail chain, said, “We would rather have one person working WITH us than three merely working FOR us.”

He was right. Employ the four tips I just outlined above and you will have people truly working with you … or as we like to say in today’s language … you will have an engaged workforce.

Skeptical About The Journey?  You’re Not The Only One!

Have you ever thought that all these ads for my Journey to the Extraordinary program are just a lot of hype?  And are you somewhat skeptical about attending the Journey program coming to Chicago, IL on November 10-11, 2017?  Other people have felt the same way.

Take Craig Evert, for example.  He’s the Director of Corporate Services at Ellen Equipment.  Craig writes, “I was the biggest skeptic before the Journey and now I’m Al Zimmerman’s biggest fan. He’s for real and the Journey program is as good as everybody says it is.”

And some people attend the Journey to the Extraordinary kicking and screaming.  They’re “sent” by their employers, friends, or spouses and they come less than “voluntarily.”   But that’s no problem.

Listen to Dave Gummer from the FBI.  Dave writes,

“I must admit that I wasn’t all that thrilled about coming to the Journey program.  I was ‘encouraged,’ or ‘pushed,’ or ‘forced’ by the powers that be.  But boy am I ever happy that I attended.  You came along at exactly the right time and offered some great techniques for getting through a difficult period in my life, both personally and professionally.  And it’s truly working — even for my wife, because I shared with her all the techniques you taught us.  A very sincere thank you.”

As you can see … employee engagement is one of the most important issues in organizations today.  So if you’re worried about someone slipping through the Journey without getting engaged, then pay attention to the words of Randy Thiele, a sales manager for the Donaldson Company.  Randy says, “I actually hung on every word of Dr. Zimmerman’s — no distractions, no daydreaming, and no dozing off.  That’s never happened to me at a 2-day seminar before.”

Still have questions?  Still a bit skeptical about signing up for the Journey to the Extraordinary?  Still can’t decide if the Journey is right for you?  Please take the FREE guided tour of the Journey.  You’ll enjoy the tour, learn a great deal, and get all your questions answered.