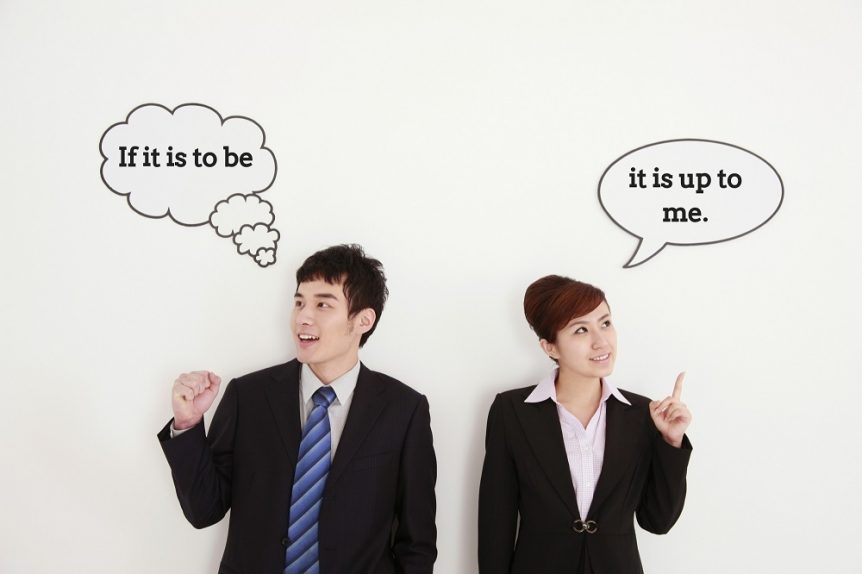 If someone were to ask you what were the ten most powerful two-letter words ever uttered, what would you say?

I find that most people have not. Most people have not fully understood the fact that IT’S UP TO ME. That may be one reason why 95% of the people reaching retirement age lack the financial resources to take care of their basic needs … without some form of government help.

I come across a lot of people who abuse or ignore their most valuable commodity … the one commodity that has the biggest chance of dramatically changing every part of their lives for the better. It’s their use of TIME. And then they wonder why they aren’t better off today than they were last year.

That’s why I will offer a powerful, practical webinar on Thursday, July 25th, from 2:00 to 3:00 p.m. Eastern Time on The Timesaver’s Toolkit: 30 Ways to Save An Hour a Day at Work and at Home.

I absolutely believe in the power of those ten two-letter words: “IF IT IS TO BE, IT IS UP TO ME.” Of course, the question is how do you make those words come alive in your life and work for you? There are two things you’ve got to do.

Success seldom falls upon the faint-of-heart. It comes to those who are not afraid to try … and try … and try.

And yet the losers in life don’t see all the trying behind the scenes. They look at a successful doctor and don’t think about the many years of schooling, internship and residency he endured before he even started to practice medicine. They read about the successful businesswoman and never realize the huge amount of work she put into the process of earning her position. They see the Olympic athletes get their bronze, silver, and gold medals but forget about the hundreds of hours of training that preceded those few winning moments.

That’s why the losers give up when they hit rocky patches on their road to success. They think, “It looked so easy when they did it. I must be doing something wrong.” And they give up. They don’t understand how success works and they lack the courage to keep on trying.

Insider’s Secret: On August 13th, we will be celebrating the 1000th issue of Dr. Zimmerman’s Tuesday Tip, one of the largest subscribed and longest lasting blogs and newsletters in the world. On that day, I will be giving away 93 truths that will ensure your unlimited happiness and success. And I will be giving away 1000 books. Don’t miss the Tuesday Tip on August 13th

But one young man understood the courage part of IF IT IS TO BE, IT US UP TO ME.

It was his last chance. He was a senior and his goal was to make it to the state wrestling championships. Unfortunately, when the match was over, the referee raised his opponent’s arm in victory. His high school wrestling career was over.

They were giving this “losing” wrestler a standing ovation because the one-armed kid had taught everyone a lesson. Even though he wasn’t the greatest wrestler during his four years of competing, he taught them WINNING IS NOT THE ONLY THING … COURAGE IS.

Yes, you’ve got to act with courage … whether or not you feel courageous. Just do it. The courage will come after the behavior.

And then, to fully implement the ten words, If it is to be, it is up to me, you must …

You will encounter rejection and put downs as you try to get ahead in your life, work, and relationships. That’s a given.

Fred Astaire knew that. Over his fireplace in Beverly Hills hung a yellowed MGM inter-office memo, a souvenir of the dancing film star’s first screen test. Dated 1933 and sent by the testing director to his superior, it read, “Fred Astaire. Can’t act. Slightly bald. Can dance a little.”

You’ve got to push beyond any rejection you might receive. Fred Astaire did.

Randy Pausch wrote about that in his book, The Last Lecture. He talked about applying for a job as a Disney imagineer and receiving “The nicest go-to-h_ _ _ letters I’ve ever gotten.” But the rejection didn’t discourage him and eventually wound up doing work for Disney.

The great educator, Booker T. Washington, knew about overcoming adversity. He told his students back in the 1800’s, “Success is to be measured not so much by the position that one has reached in life as by the obstacles that one has overcome while trying to succeed.”

I don’t know what obstacles you’re facing. Maybe it’s the economy, your company, your finances, your health, or your relationships. I don’t know the answer to every one of your difficulties. But I do know this … you will have an awful lot more success by acting with courage and pushing beyond any rejection you might receive.