“No one is big enough to be independent of others.” Dr. William W. Mayo, founder of the Mayo Clinic

The new family in the neighborhood overslept and the six-year old daughter missed her school bus.  The father, though late for work, agreed to drive her if she’d direct him.

They rode several blocks before she told him to turn the first time, several more before she indicated another turn.  This went on for 20 minutes — yet when they finally reached the school, it proved to be only a short distance from their home.

Asked why she’d led the father over such a circuitous route, the child explained, “That’s the way the school bus goes, and it’s the only way I know.”

And isn’t that the way it is with so many people?  They only know one way, even though it may not be the best way.  That’s why organizations need leaders, and that’s why leaders and team members have to work together.  That’s why the old acronym has some truth … that TEAM means Together Everyone Accomplishes More.

So what do “good” leaders DO so everyone accomplishes more?  I gave you four of those behaviors last week.  Let’s continue our checklist. 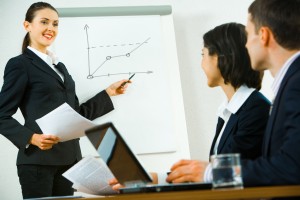 You can probably think of a thousand reasons why you don’t have the time to think about your goals, plan out your goals, or write out your goals.  But no matter what reason or reasons you come up with, you’ll always be on the losing side if you’re not a goal setter.  In fact, I dare say that you will find very few if any great leaders who were not or are not serious goal setters.

When I asked Maury Burgwin, the Chairman of the prestigious Institute for Management Studies in Pittsburgh, for his insights on leadership and success, Maury boldly proclaimed, “The best path to success is to script your desired outcome.”  And then, “To reach that desired outcome, script your tactical plan to get there.  In my affairs I have a polished practiced script for everything I hope to achieve.”

Could the same thing be said about you?

6.  A leader has a passion for winning.

In other words, getting by is never good enough.  A leader wants to win.  He wants to be the best, produce the best, and bring out the best in others.

That’s why Daryl Flood, President and CEO of Daryl Flood, Inc., is recognized as running one of the best, most successful moving businesses in the country.  As he says, “Successful leaders follow best practices that garner the loyalty and respect of their employees, and one of those best practices is seeing their leader have a passion for winning.”

And that’s probably one of the key reasons Senator Fred Thompson did not go very far in his bid for the 2008 Republican Presidential nomination.  Initially he led the polls as the one most likely to be nominated, but when the American people saw him debate, their almost-unanimous opinion was he “didn’t really seem to want the job as President.”  He didn’t have a passion for winning.  And he was soon out of the race.

A good leader has a PASSION for winning.  As someone said, “If you’re lit up with enthusiasm, people will line up to watch you burn.”

7.  A leader has a passion for winning WITH others.

No one said it better than 20th century educator G. Arthur Keough.  He said, “Greatness is not standing above our fellows and ordering them around.  It is standing with them and helping them to be all they can be.”

At Tastefully Simple, one of the fastest growing companies in the nation, from a little shack in the backyard to being listed among the top Inc.500 companies, much of their success is due to this factor.  The leadership at the top of the company, and their thousands of consultants around the world, have a passion for winning WITH others.  They call it “Abundancy.”

In their dictionary, “Abundancy” means they practice the following behaviors, “Teamwork, Servant Hearts, Generosity, Love, Openness, Giving Back, and Win-Win.”  Just the opposite of too many leaders and too many organizations who are motivated by “Ego, Competitiveness, Dog-Eat-Dog, Self-Serving, Greed, Scarcity Mentality, Territoriality, and Win-Lose.”

As you contemplate this characteristic of “good” leaders, don’t overlook the key word “WITH.”  Good leaders have a passion for winning WITH others.  But they also do not do too much FOR others.  Phillip Van Hooser, author and consultant, calls that one of the 20 sins of leadership.

You won’t be an effective leader if you DO TOO MUCH AND LEAD TOO LITTLE.  As you’ve probably thought on occasion, it’s just easier to do certain jobs yourself.  But that’s not the job of a leader. A leader must be able to show her followers that she is willing to do what is necessary to help, while keeping in mind the true responsibility of the position. Remember, Van Hooser says, “The successful leader is not the one who can do the work of ten followers; the successful leader is the one who can get ten followers to work!”

That doesn’t mean that he or she has to be buddies with everyone on the team or in the organization.  That may not even be possible let alone wise.  But you can and should build strong, positive, respectful, cooperative relationships with everyone possible.  After all, as Tom Coleman, a distinguished warrant officer for the National Guard, says,  “Success is utilizing and sharing  your experiences to assist others in achieving their goals.”

When Ed Caldwell, the Vice President of Protective Life, hired me to speak to his organization, he stressed this 8th point when I asked what accounted for his significant accomplishments over the years.  He said, “I have been blessed with four mentors and bosses over the last 30 years who took the time to build a relationship with me, who gave me candid feedback on the differences between leadership and management, and provided specific guidance at key points in my career.  Those relationships created what I consider to be the real turning points in my personal and professional development.”

A leader doesn’t wait for the sale-of-a-lifetime or a miraculous business turnaround before he celebrates with the team. He knows that little things count.  In fact, little celebrations can make a big difference.

As psychologist Dr. Terry Paulson points out, “When people are asked to consider what works, too many look for the big things — those things that get measured and reported.  But many times, it is the consistent little things leaders do that mean the most to their teams.”

And the MOST important time to celebrate might be when you LEAST feel like it.  That’s what Jill Blashack Strahan had to learn as the President of Tastefully Simple.  As she writes, “We were five years old and we’d just moved into our brand-new headquarters, one mile out of town, set on twenty-two acres, next to beautiful woods and wetlands.”

“Accordingly, we’d invited all thirty of our team members to a little celebration at 9:20 a.m.  As a gift, I’d purchased Tastefully Simple baseball caps for everyone.”

“So there we all were, the first day in our new work areas, in our brand-new building. But the mood was anything but celebratory. I mean, think about it. You’re in a new space.  All your belongings have been moved over the weekend.  You can’t find your stapler or your favorite pen.  You don’t know how to use your new phone, and your files are in a cardboard box sitting on the floor. Everyone was just a little tense.”

“At nine o’clock, I thought, ‘What was I thinking? Am I out of my mind? We can’t do this celebration. It’s our first day in the new building and everyone’s stressed! Maybe we should do it tomorrow.'”

“After a few more rants, I remembered what Andy Longclaw says in the book ‘Gung Ho.’  Recognition must be TRUE:  Timely, Responsive, Unconditional and Enthusiastic. We can’t wait. We need to have the celebration now.”

“So at 9:20 I paged everyone in the building to join us outside by the warehouse loading docks. It was a beautiful June day, warm and sunny, with a perfectly clear blue sky. I gave a little speech about June being the season of graduation, and like high school graduates, this new building was indicative of moving into a new phase of our lives.”

“We passed out the baseball caps, and in true graduation tradition we all cheered and threw our hats into the air while we sprayed everyone with Silly String. Afterwards, we went into our break room and had muffins and coffee. The whole celebration took less than half an hour.”

“But what do you suppose the mood was like at Tastefully Simple after we all got back to our work stations? The tension was ‘Poof, gone.'”

“Here’s what I learned.  When we’re all stressed out, that’s when we need to take the time to celebrate what’s right with the world. When I least feel like celebrating is when I most need it.”

When the Iron Curtain fell, when the Cold War was over, the country of Czechoslovakia ceased to exist.  The new country of the Czech Republic took root in the midst of turmoil.  But their first president, Vaclav Havel, knew he had to be a steadying force.  He gave the people a new-found hope for their fledgling democracy as he said, “Hope is not the conviction that something will turn out well, but the certainty that something makes sense regardless of how it turns out.”

If you’re like most organizations these days, you’re having your share of rough waters.  Don’t forget Reinhold Niebuhr’s timeless advice:  “God grant me the serenity to accept the things I cannot change, the courage to change the things I can, and the wisdom to know the difference.”  It still works.

And don’t forget Larry Blakely’s advice, a Process and Improvement Director at Ernst and Young.  As he puts on the bottom of his emails, “When you’re up to your eyeballs in alligators, it’s hard to remember you’re there to drain the swamp.”  You’re there to be a calming influence in the midst of the storms.

List two ways you show your passion for winning.  What else could you do to show more passion?

Make every day your payoff day!