Good listeners are not only popular everywhere, but after a while, they’re also quite intelligent.

The higher people go in management and the more authority they wield, the less they are forced to listen to others. Indeed, the less they listen. In a survey by the research firm Watson Wyatt Worldwide, they found that only 19% of managers say they listen to and take into account the comments of their employees before they make policies. 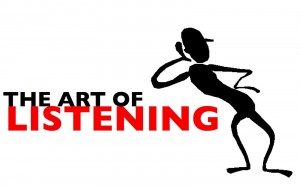 That’s dangerous. As people go higher up in management, so does their need to listen. After all, the farther they get from the firing line, the more they have to depend on others for information.

Take Rick Pitino, for example, the coach of the 1996 NCAA champion University of Kentucky basketball team. Like any other college basketball coach, he had the tough task of convincing the high school prospects to select his college over dozens of others.

He said he used to go to a recruit’s homes and make a dynamic presentation. He would talk about the strengths of the University, the team’s academic support team, the weight training facilities, and the thrill of playing in front of 23,000 devoted fans in Rupp Arena. But then, when he returned home and called the recruit the next day, he’d learn Kentucky wasn’t even on the recruit’s list.

Pitino would be shocked and would ask himself what went wrong. Wasn’t he enthusiastic enough or articulate enough? Eventually he figured out his performance was fine but his approach needed changing.

On future recruits, he would say very little. Essentially he would listen. What did the recruit want in a college and a college basketball team? What did the family want? They did most of the talking.

When he followed up the next day, he would learn Kentucky was in the final two. Why? Because Pitino listened. As he says, “By allowing other people to speak and by clearly valuing their thoughts, I started building a relationship with them instead of giving a performance.” Pitino now recommends a ratio of 4 to 1. Listen four times more than you speak.

For one day, force yourself to listen four times as much as you speak. Then notice the response you get from others.