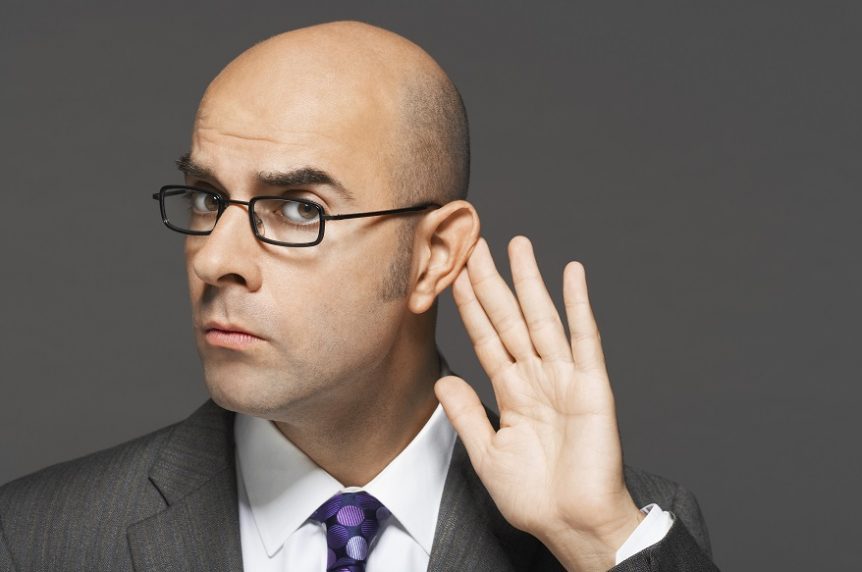 Listening is not natural, and it’s not automatic.

Oh sure, hearing is natural, for most people. That’s nothing more than sound waves hitting your eardrums.

But listening has to be learned, as one little girl discovered after finishing her first week of school. “I’m just wasting my time,” she said to her mother. “I can’t read; I can’t write – and they won’t let me talk!”

But it’s not funny when we, as adults, have not perfected our listening skills. It’s often sad and tragic. With the average adult having a listening efficiency rate of only 25%, it’s no wonder why so many relationships fall apart and so many careers don’t go as far as they could.

In addition to all the keynotes and seminars I deliver in person or virtually, I also coach a limited number of executives on their leadership development. And I can tell you from experience that almost every one of them needs to improve their listening as well, no matter how fancy their title or powerful their position.

To move you in that direction, take these tips to heart and then FOLLOW them. They will double and triple your listening efficiency.

As silly as it sounds, listening starts with a decision. You decide to tune in and really listen to the other person — no matter what’s going through your mind or what’s going on in your world.

The mere decision to listen will improve your listening. My audiences are proof of that. I ask them, “How many of you can listen… and listen well… if you want to or have to?” Almost all the hands go up. They admit… that to some extent… they can turn their listening ability on or off. And so can you.

Do you remember the old adage about having two ears and one mouth? Maybe we’re designed to listen twice as much as we speak. Whatever, listening effectiveness starts with the decision to listen.

I see this closed-minded problem everywhere. I see it when mangers ask, “What can you expect from the staff?”

I see it when the employees say, “You can’t trust what they’re saying at the top.”

I see it when salespeople say they don’t have to listen to their prospects because they already know what they’re going to say.

And I see it when people automatically say they would never listen to CNN, Fox, or whatever news channel because they have pre-determined everything those channels say is false.

In each of those cases, something is going on … but it’s not listening.

If you’re going to be a great listener, you must bring an open mind to every conversation. That does not mean you have to agree with what the other person is saying. Heavens no! That would be spineless capitulation. But you must … as I coach all my clients … withhold evaluation until comprehension is complete.

Concentration may sound like an old-fashioned, outdated concept in these days of multi-tasking, where we can be on a virtual conference call, while we’re texting someone else, cruising the Internet, and finishing a document. People almost take pride in doing several things at once rather than concentrating.

Well multi-tasking may work in some cases, but it never works very well with listening. When you “half listen” or “sorta listen,” you are guaranteed to miss some things and some of those things will damage your relationships with your coworkers, customers, and family members.

You also need to look at the person you’re talking to. Wandering eyes lead to wondering minds… wondering what was said and what you should say next.

And sit up straight. Poor posture almost always leads to lazy listening — when in reality, good listening is alert and active. It’s a lot of work.

Finally don’t do anything that would break your concentration. Don’t drum your fingers, snap your gum, play with your pen, or do anything other than listen.

The mere act of concentrating will increase your listening effectiveness from an average 25% effectiveness to an immediately higher score … perhaps a lot higher.

As an extra bonus, your concentration communicates importance and respect. You are saying, in effect, “I am listening to you and only you right now. You are getting all of me. No distractions. No mind wandering. No looking at the papers on my desk. No peeking at the TV over your shoulder. You’re getting all of my attention because you’re important to me.” And that is one heck of a powerful message to send to someone else.

Of course, in every conversation, you will be talking some of the time. And you will want to know how the other person is reacting to what you say. That’s another opportunity for you to demonstrate your listening proficiency.

You could also ask about the message the other person received. Ask, “What’s the message you got from my comments?” They may think you’re communicating disrespect when all you were trying to share was a difference of opinion.

Finally, listen to the other person’s body language as well. Your partner might say “Everything’s fine” when their body language clearly indicates it isn’t. You could say, “Your tone of voice leads me to believe you’re upset with me. I’d like to know more about that if you’re willing to talk about it.” “I’m interested in learning what’s on your mind. Would you be willing to share that with me?” And then listen to her words as well as her body language.

Final Thought: Communication is a strange thing. A message can travel around the world in a matter of seconds. But it can take years to travel that last inch into your brain if you’re not good at listening.