I have always thought Robert Schuller’s book titled Tough Times Never Last but Tough People Do was a great title, and I think the book may be more relevant now more than ever. These are tough times, and we all need to be tougher than the times.

So how do we do that? We need to think and act with courage. We need to boldly step out and speak out. It doesn’t matter if we’re concerned about the economy, our work-life balance, or our national destiny. This is not the time for fear, negativity, and comfort-zone living. This is the time for courage.

Of course, courage is a rather vague concept. So let me be specific. I believe that we all need to be practicing three types of courage. The first is the COURAGE TO DREAM. 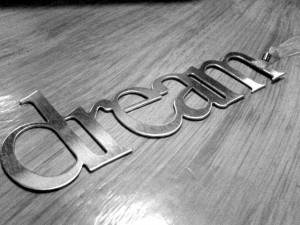 If you have ever heard me speak, I strongly believe in the need for positive thinking. Originally, I thought everybody would agree with such a noble concept. That’s not the case. Cynics call positive thinkers crazy.

By contrast, the positive people give the world a dream. They point out the good in the world and in the people around them. By reminding people of their goodness, their potential, and their possibilities, people begin to believe it and behave it.

How about you? Do you still have the COURAGE TO DREAM? I hope so.  Please share with us what your dreams are.  What are you doing to make those dreams a reality?

I mentioned at the beginning of this article that I believe there are three types of courage: Check back next week as we discuss the Courage to Speak Out.